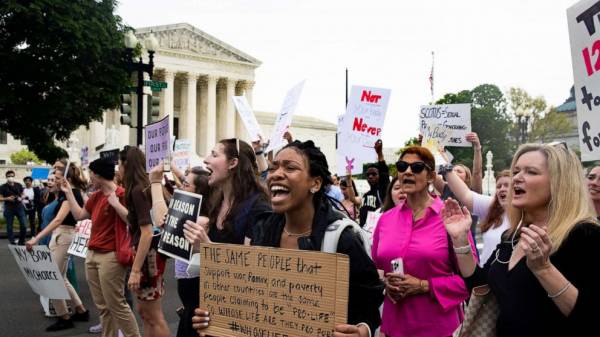 They traveled across state lines to get abortions. Now they fear a post-Roe world

A leaked draft opinion showing the Supreme Court is poised to overturn Roe v. Wade sparked nationwide outrage and panic among abortion rights advocates. And for women who already experienced challenges and restrictions in accessing reproductive care in their states, the prospect of a world without federal processions is daunting.

Valerie Peterson said that learning about the leaked draft opinion was “triggering” because it reminded her of her own “agonizing” experience.

Peterson, a single mother with two daughters, said she traveled from Texas to Florida in 2015 after finding out her baby would likely not survive and facing restrictions obtaining an abortion.

“After the leak, one of the things that I really thought about were the other women that would be impacted by this decision,” Peterson told ABC News. “If Roe v. Wade is indeed overturned, this will be a traumatic experience for a lot of people across the United States.”

Michael Reynolds/EPA via ShutterstockAbortion rights advocates yell at nearby anti-abortion advocates during protests outside the Supreme Court in Washington, D.C., on May 4, 2022.

The Supreme Court’s 1973 decision on Roe v. Wade determined that a woman’s right to have an abortion is protected under the Constitution as part of a right to privacy. Without that federal protection, the decision will be in the hands of the states.

In the leaked draft opinion Justice Samuel Alito argues that there’s no explicit right to privacy, let alone the right to an abortion, in the Constitution.

“It held that the abortion right, which is not mentioned in the Constitution, is part of a right to privacy, which is also not mentioned,” Alito writes, calling the Roe decision “remarkably loose in its treatment of the constitutional text,” and arguing that stare decisis “does not compel unending adherence to Roe’s abuse of judicial authority.”

Chief Justice John Roberts released a rare, written statement to address the leak, saying, “Although the document described in yesterday’s reports is authentic, it does not represent a decision by the Court or the final position of any member on the issues in the case.”

ABC NewsVikki Brown, a resident of New Orleans, told ABC News that she traveled to Washington, D.C. to get an abortion due to restrictions and challenges in Louisiana.

For Vikki Brown, who traveled from Louisiana to Washington, D.C., to get an abortion in 2019, learning the news was “jarring” experience because that evening she was scrambling to help a friend schedule an abortion in Louisiana — a state that only has three abortion clinics.

“I’ve been trying to help her figure out what her best option is. She hasn’t been able to get an appointment anywhere within the state of Louisiana that can see her this month,” Brown told ABC News, adding that the closest appointment they were able to find was five and a half hours away by car.

“[The news] really, for me, solidified how awful this is going to be for so many people,” Brown said.

And for Rebecca Turchanik, who said she traveled four hours from Nashville to Atlanta in 2019 to get an abortion, the news was “devastating.”

“I had been scrolling Twitter and saw it and I am honestly – I’m just devastated,” she said.

“I just had a very visceral reaction to it because I feel like there are so many impacts and waves that this impacts,” she added, “and people don’t really necessarily understand the effects of it.”

Alex Brandon/APDemonstrators protest outside of the U.S. Supreme Court in Washington, May 5, 2022.

Turchanik said that repealing federal protections will exacerbate the challenges of accessing reproductive care, which is already “a logistical nightmare” in states like Tennessee, where about 96% of counties had no clinics that provided abortions in 2017, according to the Guttmacher Institute.

And in the U.S. overall, 89% of counties had no clinics that provide abortions in 2017, per the study. This disproportionately impacts low-income women and women of color, who do not have the financial means to travel or to cover medical costs – many of which are not covered by insurance.

Turchanik said she and her partner at the time in 2019 called multiple clinics in various states and finally found an appointment in Georgia, but they had to leave early in the morning and take time off work to be able to make it.

“I don’t feel like anyone should have to add that layer of complexity to an already complex thing,” she said. “Because I don’t think that an abortion is an easy thing.”

Turchanik added that if she was not able to get a ride to Atlanta, she may not have had enough funds to make the trip.

Courtesy Vikki BrownVikki Brown, a resident of New Orleans, told ABC News that she traveled to Washington, D.C. to get an abortion due to restrictions and challenges in Louisiana.

In 2019, Brown was living in Louisiana. Should Roe be overturned, patients seeking an abortion there would have to travel over 650 miles on average to Illinois, North Carolina or Kansas — the closest states where abortion would not be restricted, according to Guttmacher.

“I’m very lucky that I had the resources to go and leave Louisiana,” Brown said of her experience.

While abortion is legal in Louisiana, she would have had to contend with a long, multi-step process in New Orleans to get an abortion when she was about five weeks pregnant. Instead, Brown said she traveled to Washington, D.C., where she stayed with a friend and was able to get an abortion in one day.

“What will happen when Roe is overturned is that women will be forced to make decisions that put their health at risk and women who have less means will suffer the most,” she added.

Courtesy Valerie PetersonValerie Peterson traveled from Texas to Florida in 2015 to obtain an abortion after facing restrictions in her home state. She told ABC News that she is fearful of a world without Roe v. Wade.

Peterson expressed concern in particular for low-income women, as restrictions add up costs to obtain an abortion. This can include travel, taking time off from work, medical expenses not covered by insurance, lodging, childcare and more.

When she traveled from Texas to Orlando, Florida, for her procedure, she said she had to pay for a flight, a hotel, a rental car and other expenses.

“A lot of women don’t have the opportunity or the capacity to come up with that amount of money, which was close to $5,000 for me,” she said.

Jim Watson/AFP via Getty ImagesAbortion rights advocates demonstrator chant in front of un-scalable fence that stands around the US Supreme Court in Washington, May 5, 2022.

For Peterson, there was also an emotional cost to restricting care. When she found out she was pregnant in 2015, she was surprised and excited as she “really thought I couldn’t have any more children.”

“I already knew that I was going to keep the baby,” she said.

She found out after visiting her doctor at six weeks that her pregnancy was classified as “high risk,” which could involve health risks for the mother and fetus and requires more frequent monitoring and ultrasounds.

Initially everything seemed fine, Peterson said, but at her 13-week ultrasound she found out that fetal anomalies have been detected. Two weeks later, she received what she described as a “devastating diagnosis.”

“I found out through ultrasound that my baby’s brain had not developed,” she said.

The fetus was diagnosed as having alobar holoprosencephaly, a rare disease that leads to structural anomalies early in the gestational development, according to the National Institutes of Health (NIH), as the brain fails to divide into right and left hemispheres. “The affected fetus is usually stillborn or dies soon after birth, or during the first 6 months of life,” according to the NIH.

Grace Hollars/IndyStar via USA Today NetworkHoosiers gathered to protest the leaked opinion of the Supreme Court on considering overturning the ruling of abortions on May 4, 2022, at Monument Circle in Indianapolis. Protestors for abortions were met with counter protesters in favor of overturning Roe vs. Wade.

After she was shown photos of the fetus’ brain and had the disease explained to her, she said she was given “two devastating options.”

Peterson was 16 weeks pregnant and in Texas, which then allowed abortions up to 20 weeks. She had to be referred by her doctor to an abortion provider and undergo mandatory counseling.

“Not only was there a three- to four-week waiting list, there was also a three- to four-day process to get the [appointment],” Peterson said, adding that the wait time caused her “mental anguish, as I was carrying the pregnancy, knowing now that there was no chance of survival.”

Peterson, who reflected on her experience in a book, “The Blue Lotus,” said learning of the leaked Supreme Court draft opinion was “heartbreaking” and took her back to the moment she learned her pregnancy would not be viable.

“To really think now that your body is being legislated by men who don’t know what it feels like to carry a pregnancy, to know that our bodies are being legislated with the lack of education and information on abortion is a problem,” she said.

After her abortion in 2015, Peterson became an advocate for abortion rights, testified before the Senate in 2019 and shared her story with women across the country.

She said after speaking at a rally outside the Supreme Court, several women told her they had abortions but told people they had a miscarriage because of the stigma abortion carries.

“That in itself is the reason why I use my name. I am a human being. I am a person,” she said.

“One of the things that I do want to say to people that may be in this situation, is that self care matters. You matter,” she added. “We all have to make sure that in our advocacy, that we are also taking care of ourselves, and working to change the laws that do not work for us.”

Previous : More than three in five homeowners say they were ‘winging it’ when they bought
Next : Russian commander admits failed invasion looks ‘bleak’ for Vladimir Putin – World News