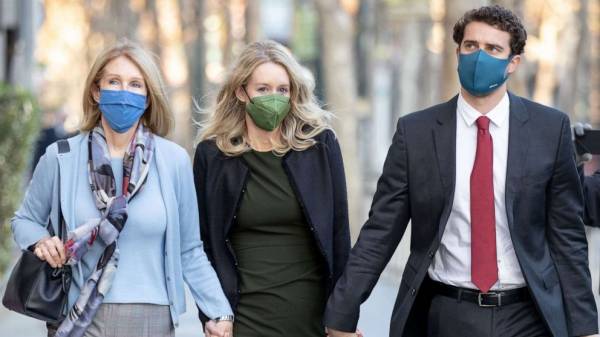 SAN JOSE — Theranos founder Elizabeth Holmes placed the logos of two major drug companies on blood-testing validation studies, which she then sent to Walgreens executives ahead of their lucrative retail partnership, she told jurors on Tuesday. Theranos also sent the reports to investors who bought millions of dollars of her start-up’s stock.

The embattled former CEO also acknowledged that Theranos did not publicly disclose it was running blood tests on third-party machines rather than the devices the company had pitched to potential investors and VIPs during demonstrations, chalking it up to trade secrets.

Holmes made the bombshell admissions before a packed courtroom in California’s Silicon Valley during her criminal fraud trial, where prosecutors have previously argued that she failed to tell investors about the third-party machines and doctored documents, which led them to believe the pharmaceutical companies had endorsed Theranos and its blood-testing technology.

Witnesses from both Pfizer and Schering-Plough Corporation testified earlier in the 12-week trial that Holmes did not have permission to use their trademarks on the studies.

But Holmes told jurors on Tuesday that she did not conceal her use of the logos, saying she used them “because this work was done in partnership with those companies and I was trying to convey that.”

“I wish I had done it differently,” Holmes said.

Holmes, a 37-year-old native of Washington, D.C, is charged with nine counts of wire fraud and two counts of conspiracy to commit wire fraud. She could face decades behind bars if convicted.

She remains on direct examination and will continue her testimony Monday, after the long Thanksgiving holiday weekend.

Members of both the press and public began lining up outside the Robert F. Peckham Federal Courthouse in San Jose early Tuesday at around 2 a.m. PT to claim one of only 34 seats inside the courtroom to see Holmes take the stand for a third day. They stood outside the building for hours before Holmes, wearing a forest green dress and face mask, entered the courtyard just after 8 a.m. PT hand-in-hand with her mother, Noel Holmes, and her partner, Billy Evans.

While testifying Tuesday, Holmes said that in 2013, her company grappled with the high number of blood samples returning to their central lab. So they came up with inventions that allowed them to run the drops of blood originally intended for Theranos machines on modified third-party devices, such as the Siemens ADVIA.

Holmes admitted to jurors that she did not explicitly tell investors, or even Walgreens executives, “in this way” about these third-party devices Theranos was running samples on, per advice from her company’s legal counsel.

“If we disclosed that information, we would lose trade secret protection,” she said. “The big medical device companies like Siemens could easily reproduce what we had done if they knew what we were doing. They had more engineers than we did and a lot more resources.”

Throughout her testimony, Holmes only mentioned the name of her ex-boyfriend and former Theranos COO Ramesh “Sunny” Balwani a handful of times. But when she did, she talked about how he was in charge of financial projections and responsible for handling some investors.

Balwani was charged as Holmes’ co-conspirator, but their cases were severed after Holmes claimed they had an “abusive intimate-partner relationship,” according to court documents. Balwani has denied the allegations.

Previous : In his final days, Ahmaud Arbery’s life was at a crossroads
Next : Man arrested after mum-of-three ‘dismembered with chainsaw’ at home in horror attack