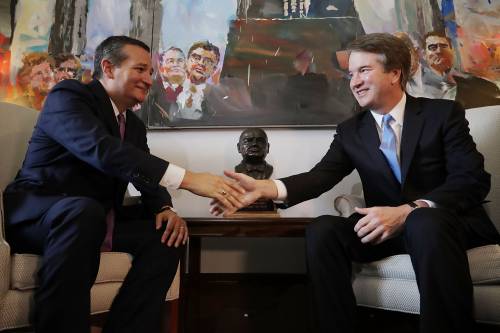 The Supreme Court takes up a case, brought by Ted Cruz, that could legalize bribery

The details of Federal Election Commission v. Ted Cruz for Senate, a case that the Supreme Court will hear next Wednesday, read more like a paranoid fantasy dreamed up by leftists than like an actual lawsuit.

The case concerns federal campaign finance laws, and, specifically, candidates’ ability to loan money to their campaigns. Candidates can do so — but in 2001, Congress enacted a provision that helps prevent such loans from becoming a vehicle to bribe candidates who go on to be elected officials. Under this provision, a campaign that receives such a loan may not repay more than $250,000 worth of the loan using funds raised after the election.

When a campaign receives a pre-election donation, that donation is typically subject to strict rules preventing it from being spent to enrich the candidate. After the election has occurred, however, donors who give money to help pay off a loan from the candidate effectively funnel that money straight to the candidate — who by that point could be a powerful elected official.

A lawmaker with sufficiently clever accountants, moreover, could effectively structure such a loan to allow lobbyists and other donors to help the lawmaker directly profit from it. According to the Los Angeles Times, for example, in 1998, Rep. Grace Napolitano (D-CA) made a $150,000 loan to her campaign at 18 percent interest (though she later reduced that interest rate to 10 percent). As of 2009, Napolitano reportedly raised $221,780 to repay that loan — $158,000 of which was classified as “interest.”

So in 11 years, the loan reportedly earned Napolitano nearly $72,000 in profits.

And that brings us back to the Ted Cruz for Senate lawsuit. Sen. Ted Cruz (R-TX) wants the Supreme Court to strike down the limit on loan repayments to federal candidates. That decision could potentially enable any lawmaker to make a high-dollar, high-interest loan to their campaign, and then use that loan as a vehicle to funnel donations directly into their pocket. (Pre-2001 FEC rulings permitted candidates to make loans to their campaign at “a ‘commercially reasonable rate’ of interest,” but that apparently did not stop Napolitano from making a loan at a double-digit interest rate.)

And even if lawmakers do not enrich themselves by making high-interest loans to their campaign, the fact remains that every dollar a campaign donor gives to help a campaign pay back a loan from the candidate goes straight into that candidate’s pocket. As the Justice Department argues in its brief defending against Cruz’s lawsuit, “a contribution that adds to a candidate’s personal assets (and that can accordingly be used for personal purposes) poses a far greater threat of corruption than a payment that merely adds to a campaign’s treasury (and that can accordingly be used only for campaign purposes).”

Cruz claims that permitting such contributions is necessary to protect “the rights of candidates and their campaign committees to make constitutionally protected decisions about when and how much to speak during an election.”

While a decision in Cruz’s favor could effectively make it legal for wealthy donors to bribe lawmakers, Cruz has a very good chance of prevailing in a Supreme Court where Republicans control six of the Court’s nine seats.

Although current precedents nominally permit Congress to enact campaign finance laws to prevent “corruption and the appearance of corruption,” the Court’s decision in Citizens United v. FEC (2010) defined the word “corruption” so narrowly that it is basically meaningless. And the current Court is significantly more conservative than the one that handed down Citizens United a dozen years ago.

Justice Brett Kavanaugh, for example, suggested in a 2002 email that he wrote while he was a White House official that there are “some constitutional problems” with laws placing a cap on how much an individual donor can give to a candidate — something that even decisions like Citizens United permit.