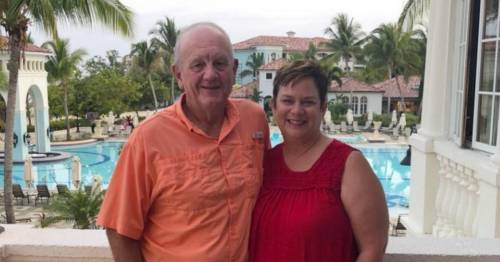 A mum shared a heartbreaking final post before she and her husband were found mysteriously dead days later in the Bahamas.

Robbie and Michael Phillips were two of the three US tourists who tragically died over the weekend in their holiday get-away in the Bahamas.

A fourth person, a US woman, was airlifted to a Florida hospital where she remains in a critical condition as officers investigate the cause of death.

The four dead are believed to be two couples who were sleeping in separate but joined villas.

But 65-year-old Robbie shared her last ever social media post of the idyllic island they were staying on.

The US tourists were two of three who died
(

The mum-of-three and grandmother-of-six’s comments were flooded with people wishing her a lovely holiday.

She wrote: "If you want the most beautiful long private beach with clear blue water and you like to hear the waves lapping , see sand dunes and hear the sea gulls talking – this is it! RELAXING The Greg Norman golf course is a bonus."

However, the happy comments and well-wishes turned to dread and worry from her friends as news of her mysterious death reached them.

The luxury Sandals Emerald Bay resort where they were staying
(

Officials are still trying to confirm the official cause of her death but do not currently think foul play was the cause, according to Chester Cooper, the tourism minister of the Bahamas.

Currently, it has been reported that one working theory is focusing on the air conditioning units that may have caused poisoning.

Her business began as a mother-daughter endeavour, she says on her website, but now expanded to include four people.

Along with her husband Mike, they also own Royal Travel which is also connected to The Sand Lady.

Autopsies are expected to be completed this week to learn the official cause of their deaths.

The two other victims were named, they included Alabama native Vincent Chiarella who was sadly found dead in his hotel room, hours after he reportedly felt ill.

He was celebrating his anniversary with his wife Donnies at the luxury resort and she has now been rushed to hospital.

Their son Austin, speaking to ABC News, said his mum woke up to find she “couldn’t move” and she also saw Vincent “laying on the floor”.

He added: "Her legs and arms was swollen and she couldn’t move and she screamed to get someone to come in the door.”

Previous : Mum says son has missed 8 months of school because council won’t pick him up
Next : More Kinder products recalled from supermarkets due to salmonella fears