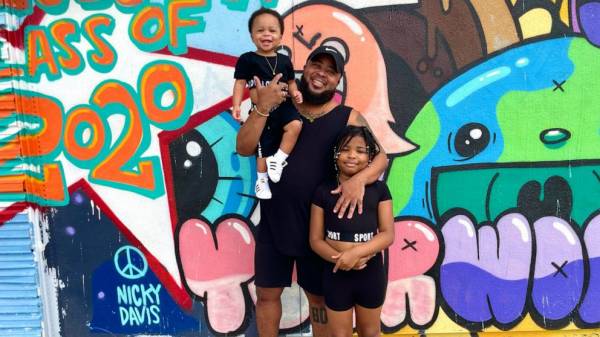 The push for inclusion in the abortion rights movement

Kayden Coleman, a transgender man, didn’t know he was pregnant for 5 1/2 months.

Coleman himself didn’t know he could get pregnant after undergoing long-term hormone therapy, and his primary care physician, who is also trans, didn’t think to provide him with a pregnancy test, he said.

He excitedly welcomed both of his children into the world, but the prospect of a new environment in light of the leaked Supreme Court decision that could overturn Roe v. Wade haunts him.

Courtesy Kayden ColemanKayden Coleman didn’t know he was pregnant until he was 5 1/2 months into his pregnancy.

“I can imagine that Texas would be one of those states that would pounce on making it completely illegal. Where does that leave me?” he said.

Some gender-nonconforming people and activists say that transgender men, like Kayden, and nonbinary people are being left out of the conversation around abortion and its future. And they say that gendered treatment from medical providers, abortion rights activists and others creates potentially dangerous situations.

They also say that because the transgender community can often only get safe and inclusive care at clinics that provide abortions, restricting them impacts overall healthcare.

“I have a working uterus and two kids that I gave birth to. It’s an odd space to be in,” he said. “Are we even welcome in spaces to stand shoulder and shoulder with women-identified people? It’s very isolating and uncomfortable.”

Not just a women’s issue

Abortion rights are not solely a women’s issue — transgender men and nonbinary people who can get pregnant are demanding acknowledgment in the fight against restrictions.

Activists argue that people of all genders are affected by poor reproductive health care under our current systems, and it is often disproportionately worse for socially marginalized people, such as those in poverty.

Income can be a major determining factor in one’s health, according to the Institute for Research on Poverty, and LGBTQ people have a higher rate of poverty than their non-LGBTQ counterparts — 22% to 16%.

“We all kind of have an idea of how difficult it is to seek and receive reproductive care as cis[gender] women and you can imagine how impacted that becomes when you’re seeking that care as someone who has a community that hasn’t made a place for them,” said Ash Turner, a patient educator at Allentown Women’s Center in Pennsylvania.

Courtesy Kayden ColemanAbortion rights are not solely a women’s issue, Kayden Coleman says. Transgender men and nonbinary people who can get pregnant are demanding acknowledgment in the fight against restrictions.

Not only are the trans and nonbinary communities now battling to uphold their rights to bodily autonomy and reproductive healthcare, but also facing ongoing attacks on gender-affirming health care for young trans people and the potential shutdown of trans healthcare clinics.

“At the end of the day, the core issue is that the opposition is attacking our right to bodily autonomy,” said D. ​​Ojeda, a senior national organizer at trans advocacy organization National Center for Transgender Equality. “The tactics they use to increase barriers for gender-affirming care are so so similar to the attacks they’re doing on access to abortion and the criminalization of health care providers.”

Abortion clinics are sometimes also the only places for trans or nonbinary people to access care in their area, according to Ojeda.

When abortion clinics shut down due to abortion restrictions, the community’s access to inclusive care may be gone too — on top of the loss of an abortion provider.

“As a nonbinary person myself, I’ve had general medical care with doctors that have refused to use the correct pronouns,” Turner said. “I’m sure that it makes it so much harder to face when that doctor is providing medical care in terms of an abortion, where some people can already feel guilt or shame, especially because of the society’s opinions that are forced onto them.”

Inclusive and safe reproductive care can be hard to come by for some gender-nonconforming people, activists say. They may face discrimination or prejudice from care providers, who may not respect and acknowledge a patient’s pronouns or identity, Coleman, Turner and Ojeda say.

Coleman said some doctors may seem uncomfortable or unwilling to ask about hormone intake or about gendered body parts even when clinically necessary due to a patient’s gender identity.

“These conversations surrounding pregnancy and abortion cause so many layers of problems and issues and blockages and macro- and microaggressions and trauma for people in the trans community who are just trying to navigate these spaces safely,” Coleman said.

When it comes to accessing abortions, the fear of discrimination is compounded by the stigma and restrictions surrounding the health care procedure, gender-nonconforming activists say.

Courtesy Kayden ColemanKayden Coleman, a transgender man, has given birth to two children. He and other gender-nonconforming people say abortion rights are not just a women’s issue.

However, a newer study published in 2020 from the American Journal of Obstetrics & Gynecology confirmed that trans and nonbinary people do have abortions, and found that many prefer medication abortion over surgical abortion because it is seen as less invasive, offers better privacy and anesthesia is not required.

The report also found that abortion providers can improve care for gender-nonconforming people by adopting gender-neutral intake forms and inclusive language in their clinics.

Quality reproductive healthcare nationwide would be a win for not just women — but all people, according to reproductive rights activists.

They say everyone, whether they can give birth or not, can benefit from access to abortions due to the implications an unplanned pregnancy can have on a person and their family’s life.

For example, the research organization Advancing New Standards in Reproductive Health found that being denied an abortion can have serious impacts on a person’s health and wellbeing. It found that women who were denied a wanted abortion and had to carry an unwanted pregnancy had four times greater odds of living below the Federal Poverty Level.

The Trans Journalists Association has recommended using phrases like abortion patients or people seeking abortions, or other wording as applicable, instead of solely using “women” in discussions about abortion.

An inclusive fight, activists say, is one more likely to win.

“Both movements are fighting the same opposition when it comes to access to health care,” said ​​Ojeda. “Forced pregnancy on anybody is very, very violent.”