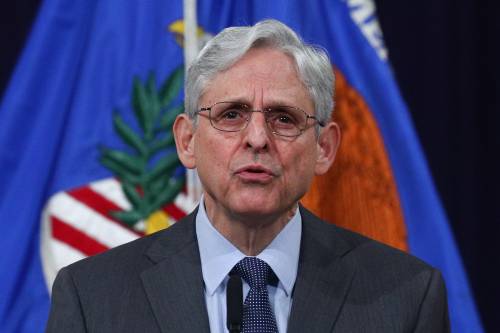 The DOJ has a plan to protect voting rights. It might not be enough.

As Republican-controlled state legislatures around the country clamp down on the right to vote, the Biden Justice Department is preparing to push back — but its efforts, hampered by stalled federal voting rights legislation, may only be able to achieve so much.

In a speech on Friday, Attorney General Merrick Garland laid out the DOJ plan to protect voting rights and announced that the department’s Civil Rights Division would begin staffing up to aid enforcement efforts.

According to Garland, the voting section of the Civil Rights Division will double its staff of lawyers “within the next thirty days,” and the DOJ will renew its efforts to use existing laws, such as the Voting Rights Act of 1965, the National Voter Registration Act, and the Help America Vote Act, to “ensure that we protect every qualified American seeking to participate in our democracy.”

“There are many things that are open to debate in America,” Garland said Friday. “But the right of all eligible citizens to vote is not one of them. The right to vote is the cornerstone of our democracy, the right from which all other rights ultimately flow.”

To protect that right, though, the department has its work cut out for it: already this year, at least 14 states, including swing states like Arizona, Florida, and Georgia, have imposed new voting restrictions, according to the Brennan Center for Justice, which tracks voting rights issues.

And last weekend, Texas Democrats narrowly (and possibly only temporarily) blocked an additional measure in the Lone Star State, which would have slashed early voting hours and limited mail-in voting in the state, among other changes, by walking out of the Texas Capitol to deny the state House a necessary quorum.

Garland said Friday that those new laws would be examined as part of the DOJ’s voting rights push, as would state-level election “audits” like the one currently underway in Arizona.

Additionally, the DOJ will take steps to address election disinformation, according to Garland, and it will publish new guidance on early voting, mail-in voting, and the upcoming redistricting process.

“Where we see violations, we will not hesitate to act,” Garland said.

Despite laying out a major effort to combat voter suppression and protect voting rights, however, Garland was also forthright on Friday about the DOJ’s limitations in the wake of the Supreme Court’s 2013 decision in Shelby County v. Holder, which struck down a key portion of the Voting Rights Act.

According to the Court’s ruling in Shelby, the preclearance formula used in the act — which defined which states and localities were subject to preclearance, or approval by the federal DOJ before changing their voting laws — was out-of-date and unconstitutional.

The result, as Jenée Desmond-Harris explained for Vox in 2016, is that “until Congress passes legislation with a new formula for preclearance under Section 4 — which doesn’t look likely to happen anytime soon — jurisdictions that were covered by the previous formula are free to make election changes without any need to get approval from the federal government.”

The pre-Shelby coverage formula that imposed preclearance requirements on those states mandated that any state or “political subdivision” within a state that both “maintained a ‘test or device’ restricting the opportunity to register and vote,” and had less than 50 percent of its voting-age population either registered to vote or voting in the 1964 presidential election would be subject to federal preclearance.

However, while the formula was updated over the years — for example, the iteration struck down by the Supreme Court relied on voter turnout and voter registration levels from 1972 instead — the Court ruled that:

But approximately eight years after the Supreme Court’s decision, Congress still hasn’t provided a new formula for preclearance, and doesn’t look likely to do so anytime soon, since a renewal of the Voting Rights Act would require 60 votes in the Senate under current rules and, despite little Republican support for such a bill, Democratic Sens. Joe Manchin and Kyrsten Sinema continue to take a hard line against abolishing the filibuster.

What did happen in the interim, however, was a slew of new voting restrictions in states previously subject to preclearance — restrictions that may not have become law, were preclearance still in place. As P.R. Lockhart reported for Vox in 2019:

Similar measures have continued to pile up since then, particularly in the wake of former President Donald Trump’s 2020 election defeat and the widespread GOP adoption of baseless “election fraud” rhetoric. As Garland pointed out on Friday, that’s at least partially because of Shelby, which put an end to preclearance absent further congressional action.

“Although we will not wait for that legislation to act, we must be clear-eyed,” Garland said Friday. “The Shelby County decision eliminated critical tools for protecting voting rights. And, as the President has said, we need Congress to pass S.1 and the John Lewis Voting Rights Act, which would provide the department with the tools it needs.”

Though the harm done by Shelby and the effective end of preclearance isn’t new, Garland’s speech Friday highlights why things are looking increasingly grim for voting rights in the US, despite the prospect of more DOJ enforcement of federal voting protections.

Specifically, as Vox’s Ian Millhiser explained earlier this month, the current GOP offensive against voting rights, animated by the Big Lie that has increasingly become an article of faith for the Republican Party, is all the more worrying because it is being advanced on multiple fronts, some far harder to overcome than others.

In addition to direct efforts to make it harder to vote — early voting restrictions, voter ID laws, and the like, none of which are new to the GOP — multiple Republican-controlled state legislatures have advanced efforts that could make it easier for the GOP to overturn elections on the basis of made-up claims of voter fraud.

What’s more, Georgia isn’t alone in attempting to shift power over elections to Republicans. In Arizona, Republican state legislators are pushing a measure to strip Democratic secretary of state Katie Hobbs of her power to defend election lawsuits.

The measure, which was advanced through committee late last month, would instead transfer that power to a Republican — and as the Washington Post’s Aaron Blake points out, appears specifically designed to target Hobbs and would expire when her term does.

That particular proposal hasn’t passed yet, and it’s unclear if it will — but Arizona Republicans, who are currently overseeing an “audit” of the the 2020 election results in Maricopa County, have been at the forefront of the GOP war against small-d democracy with measures like the one targeting Hobbs.

As political scientist David Faris explained to Vox’s Sean Illing in May, the new GOP strategy hinges on finding “a way to overturn an election with the veneer of legality” — and Faris says 2020 was only a “test run.”

“You have to give Trump and Republicans some kind of dark credit for figuring out that this is really conceivable,” Faris told Vox. “I think they now know that, even though it would cause a court battle and possibly a civil war, that if they can’t win by suppressing the vote and the election is close enough, they can do this if they control enough state legislatures and the Congress.”

As Garland said in his speech Friday, however, there are bills that could potentially stem the tide of GOP-led voter suppression and election subversion measures. Specifically, two Democratic proposals — the For the People Act and the John Lewis Voting Rights Act — would both make strides toward resurrecting and expanding federal voting rights protections.

The first of the pair, the For the People Act, would represent a sea change in federal voting protections if passed.

According to Vox’s Andrew Prokop, the bill “would require automatic voter registration, same-day registration, and at least two weeks of early voting” in all federal elections, and it would “restore voting rights to all felons who have completed their terms of incarceration, allow registered voters lacking IDs to submit a sworn written statement instead, and attempt to limit voter roll purges,” among a slew of other changes.

It would also establish nonpartisan redistricting commissions to end partisan gerrymandering, create new anti-corruption measures, and quite a bit more.

However, it’s likely dead in the water after Manchin came out against it in an op-ed last week, even setting aside the fact that it lacks Republican support and thus couldn’t clear the 60-vote threshold imposed by the filibuster (which, again, Manchin does support).

That leaves the John Lewis Voting Rights Act, which would give the DOJ back what Garland called its “most effective tool to protect voting rights over the past half-century” — preclearance.

According to New York magazine’s Ed Kilgore, Manchin has even proposed a version of the bill that would go farther than the formula struck down by the Supreme Court in 2013 and expand preclearance to all 50 states, though it wouldn’t impact voting laws like the one already on the books in Georgia.

Still, a renewal of the Voting Rights Act, like the For the People Act, would be subject to the filibuster, which doesn’t put it in much better shape as far as prospects in the Senate go. Since Manchin is on the record as supporting it, and it has at least one Republican backer in Alaska Sen. Lisa Murkowski, it’s a slightly cheerier picture — but if Manchin and Sinema don’t budge on the filibuster, and they don’t seem inclined to so far, it won’t matter.

As a result, even as the DOJ prepares to step up its voting protection efforts, it’s somewhat unclear what comes next in the struggle over voting rights. As Washington Post columnist and former FiveThirtyEight elections reporter Perry Bacon Jr. wrote last month, “America is still headed in a terrible direction — and at a much faster pace than I expected when Biden took over.”

“Moderate Democrats and anti-Trump Republicans either don’t appreciate the direness of the situation or don’t care,” Bacon argues. “I hope I am overly alarmed about all of this. But I don’t think I am. Perhaps democracy dies faster in darkness. But it could also die slowly in the light, as all of us watched but didn’t do enough to save it.”

Previous : BBC One makes schedule change as shows pulled after Christian Eriksen Euro 2020 collapse
Next : Le’Veon Bell apologizes for comments about Kansas City Chiefs coach Andy Reid, but does not ‘regret at all what I said’