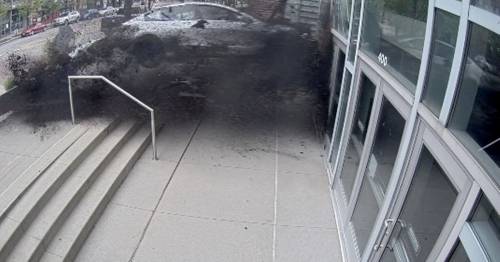 Dramatic footage has been released from a CCTV camera, which shows a Tesla crashing through the glass wall of a convention centre.

The video shows the extreme force with which the Tesla Model 3 hits the building.

It smashes through the glass and ends up pointing backwards inside.

The Tesla was travelling at around 70mph when it hit the Greater Columbus Convention Centre, the Columbus Dispatch reports.

The driver told police afterwards that the accident happened when the Tesla lost the ability to brake and could not stop.

In an incredible stroke of luck, no one was killed or seriously injured by the car, which careened through a red light as pedestrians, cars and buses travelled through a nearby high street around lunchtime on a business day.

Image:
The video shows the brutal force with which the car hit the building)

If the car had not rammed into a steel support column inside the Convention Centre after ploughing through a glass wall, it may have continued through the interior of the facility.

The centre was hosting several events at the time, including a girl’s junior volleyball championship.

It was not clear from police reports whether ‘Autopilot’ – a Tesla self-driving feature – played any role in the crash.

The video of the incident was obtained from the Greater Columbus Convention Authority through an Ohio Public Records Act request.

Earlier this year, tens of thousands of self-driving Tesla cars were recalled due to a glitch which allowed them to travel through stop signs.

The US company announced it would recall 53,822 U.S. vehicles with the company's Full Self-Driving (Beta) software.

There were concerns of some models exhibiting "rolling stops", rather than coming to a complete stop at some intersections, posing a safety risk.

The Tesla narrowly missed crashing into children in the centre

NHTSA said the feature may allow vehicles to travel through an all-way stop intersection – an American four-way stop is a traffic management system which requires vehicles on all the approaches to a road intersection to stop – without first coming to a halt.

Tesla will perform an over-the-air software update that disables the "rolling stop" functionality, the NHTSA said.

Tesla was not aware of any crashes, injuries, or deaths related to the issues with the recalled vehicles, according to the highway administrator.