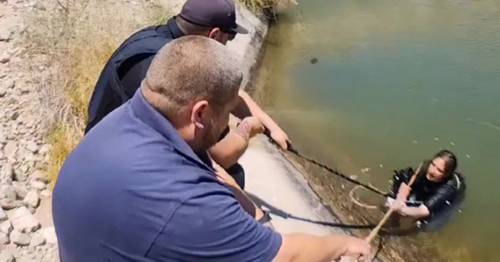 A stricken woman and her terrified dog cheated death after being trapped in a canal for almost 18 hours.

Police bodycam footage captured the rescue mission in Arizona, US, which sees a handful of officers working together to save the pair.

The rescue took place last week after the woman had been walking her dog and had let it off the lead, unaware of the nearby canal.

But when she noticed the pup was unable to get out of the canal, she went in to get him and also became stuck.

Police officers came to the pair's rescue around noon the following day after a conductor on a passing train noticed someone in "distress" and immediately dialled 911.

Almost 18 hours later, she was finally rescued – and both are safe
(

But while attempting to hoist the woman from the water, the strap being used by the police broke.

A long dog lead was then used to create a loop, before being lassoed around the woman in a bid to pull her to safety.

The woman was taken to a nearby hospital but neither her nor the dog are said to have sustained any critical injuries.

It not the only fortunate pup who will be grateful for some extra assistance.

Bodycam footage captures in the police rescue mission in Arizona, US
(

A "very lucky" dog was rescued by a local lifeboat station after being caught in a fast-flowing channel in the sea.

RNLI Hunstanton received a call on Wednesday to help a woman and her dog at Brancaster, Norfolk.

They found themselves in trouble and needed some help fast.

The lifeboat crew located stricken Digby the Springer Spaniel in a channel faced with the incoming tide.

Thankfully, the dog was aboard a boat to safety and volunteers were able to reunite the pet with its owner before they were taken to the harbour.

An RNLI spokesperson said it was "completely exhausted and very lucky".

Previous : Gran deported after going to disturbing lengths to cover up the murder of her son’s fiance – World News
Next : Girl, 17, killed and three teenagers rushed to hospital after horrific car crash