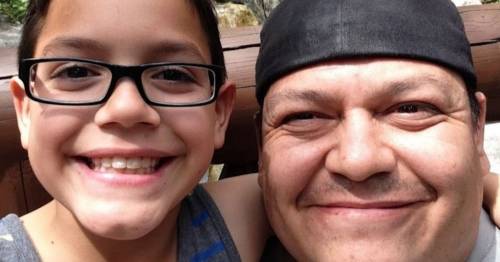 Teen, 17, takes own life after blaming himself for dad’s Covid death

A teen, 17, who blamed himself for his dad dying from Covid after his family went to a school sports event where they all caught the virus, has now taken his own life.

Mum Stephanie Reyes, from Los Angeles, has spoken about how her family has suffered two tragedies after her son Anthony Reyes Jr was unable to overcome the loss of his father and she now wants to highlight the seriousness of depression in children.

Last August the family of five was looking forward positively, having moved to a new home in the Whittier neighbourhood but then they all picked up Covid at a school sports pep rally.

The condition of the dad Anthony Reyes Sr, 46, who had a pre-existing heart condition, quickly deteriorated and he died after being put on a ventilator on September 11, reported the Los Angeles Times.

Stephanie said that before he died, she allowed her 17-year-old son Anthony Jr to see him and feels now it was a big mistake as it had a very bad impact on him – having already felt responsible for him getting Covid.

Anthony Jr struggled with depression after his dad died
(

The teen was left haunted with the images of his dad with blood building in the corner of his eye and also being the last member of the family to see his dad alive.

"My son wanted to go see his dad, against my better judgement, I let him go. It was the worst mistake I did," she told Fox 11.

She is frustrated that she was not able to get professional help for her son’s depression and claims that therapists she tried to contact were all booked up.

Then tragically on December 28 she woke around 4am and going to investigate after having seen a light on in her son’s room, she found that he had taken his own life.

"He was gone. I couldn't believe my baby’s gone."

Stephanie, 37, has now been left to look after her two surviving daughters Reyna and Marissa herself.

A funeral service is being held this Saturday, January 22, for Anthony Jr and a gofundme page has been set up to help pay for costs.

A message on the gofundme page reads: Hi, as many of you know our family lost Anthony Sr. four months ago, and sadly Papi (Anthony Jr) was taken from us way too early.

"He was only 17 years young and had his whole life ahead of him. He was the happiest kid ever and had the most contagious smile and laugh that would brighten anyone's day. We are absolutely devastated by the sudden loss of Papi.

"He was a Son, a brother, a grandson, a cousin, and most of all a friend, and to all of us, he was family. At this time we are asking for help in funding his funeral during these hard times, any and all donations will be greatly appreciated."