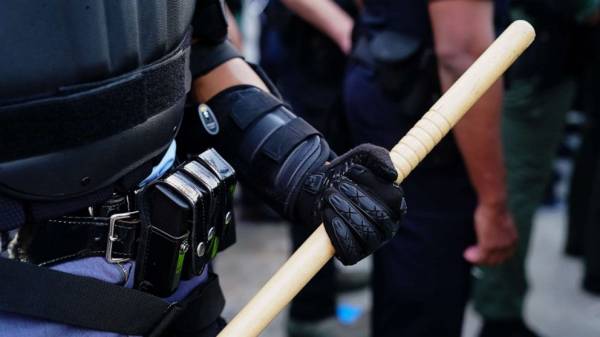 The Supreme Court last month remanded a lower court’s ruling that police officers who used excessive force on a 27-year-old man who died in their custody were protected because they didn’t know their actions were unconstitutional.

And it’s a decision that could have lasting effects, according to legal experts including Jon Taylor, an attorney who represented the family of that man, Nicholas Gilbert.

Steve Art, an attorney who submitted a brief on behalf of the ACLU for the case, shared Taylor’s sentiments.

“It’s extremely rare for the Supreme Court to summarily reverse a decision finding that police did not use excessive force,” Art told ABC News. “The Supreme Court is sending a clear signal to lower courts that they cannot reflexively decide cases for police officers when they use brutal tactics on restrained citizens.”

Gilbert died in a St. Louis Police Department holding cell in December 2015 after six officers restrained him for 15 minutes, handcuffed him and placed him in shackles, and forced him face down on the ground. Police at the time said they believed Gilbert to be suicidal and said they acted to prevent him from taking his own life. The officers were never criminally charged.

Gilbert’s parents, Bryan Gilbert and Jody Lombardo, sued the officers after his death, and the 8th U.S. Circuit Court of Appeals ruled against them.

The officers pushed to receive qualified immunity — meaning they’d be shielded from personal liability unless proven to have violated clearly established constitutional rights — when confronted with the lawsuit in 2016, and in 2019, that immunity was granted by a federal judge in the 8th Circuit Court who did acknowledge that excessive force had been used.

Courtesy Brown FamilyMichael Brown is seen in this photo posted to Facebook, May 19, 2013.

But the Supreme Court on June 28 remanded the case back to the lower court, ruling that the 8th Circuit Court did not clearly define whether “prone restraint” was constitutional.

“The Eighth Circuit didn’t get to the qualified immunity question because it didn’t find a constitutional violation in the first place,” Elizabeth Beske, a law professor at American University, told ABC News. “By sending the case back, the Supreme Court is signaling to the Eighth Circuit that excessive force cases require a hard look at specific facts and circumstances and can’t be dismissed lightly.”

Part of the ruling stated: “It is unclear whether the court thought the use of a prone restraint — no matter the kind, intensity, duration or surrounding circumstances is constitutional so long as an individual appears to resist officers’ efforts to subdue him.”

Alito wrote the dissent, which included: “We have two respective options: deny review of the fact-bound question that the case presents or grant the petition, have the case briefed and argued, roll up our sleeves and decide the real issue. I favor the latter course, but what we should not do is take the easy out that the court has chosen.”

“That Chief Justice Roberts and Justices Kavanaugh and Barrett signed on to this opinion sends a powerful message that this Court is paying attention and will not brook casual treatment of these serious social issues,” Beske added.

This decision could have a lasting impact and set a precedent for future cases involving excessive force, Taylor, the lawyer for Gilbert’s family, explained.

“I think the Court recognizes this political moment, in particular, that there is heightened attention being paid to these kinds of issues,” Taylor added. “I think that partially explains why the Supreme Court didn’t let this go.”

Drew Angerer/Getty Images, FILEA view of the Supreme Court on June 28, 2021, in Washington.

Art, who submitted the brief for the ACLU, added: “We expect that the Lombardo case will result in juries hearing more cases brought by the loved ones of those killed and hurt by police, rather than those cases being decided by judges before trial.”

This is not the first time the 8th Circuit has weighed in on an excessive force case. It also had jurisdiction over cases involving Michael Brown and George Floyd, who each were killed by police after being arrested for misdemeanors — Brown in 2014 and Floyd in 2020. In 2017, the 8th U.S. Circuit Court of Appeals upheld, in a 2-1 decision, a lower court ruling that Ferguson, Missouri, police were not entitled to qualified immunity from a lawsuit by Dorian Johnson, who was stopped along with Brown.

“The Court’s efforts in this area are likely responsive to the ongoing racial justice movement and to political pressure on the Supreme Court itself. Calls to ‘pack’ the court will grow if it is widely perceived that the conservative Court is significantly out-of-step with public opinion,” Beske said.

Gilbert at the time was homeless and under the influence of methamphetamines when he was arrested for a nonviolent misdemeanor, police said. After Gilbert died, officers said they believed he was experiencing a “mental health crisis” when he was in his cell, prompting officers to engage and restrain him.

Taylor said Gilbert “was lifting his chest in an attempt to breathe and saying it hurts, asking them to stop, and then he died. An autopsy found the cause of death to be asphyxiation induced by forcible restraint.”

While race-related issues perhaps have been more widely documented in cases where police have been accused of using excessive force, another major factor is mental illness. According to the Treatment Advocacy Center, persons with an untreated metal illness are 16 times more likely to be killed by law enforcement.

The Department of Justice has warned about these risk factors in the past, and law enforcement agencies across the country have been asked to train police on how to properly handle potential mental illness episodes. Officers have been cautioned that persons suffering such an episode, or who may be under the influence of alcohol or drugs, are at a particular risk of dying by asphyxiation when held face down because it restricts their breathing.

In a statement provided to ABC News, Gilbert’s mother said her son was “kind and loving” and “the type of young man who gives the shirt off his back. He was bubbly and happy all the time. He was a happy young man and he had plans in life.”

“I want my son to finally have his day in court in front of a jury,” she added. “I want my son’s case to be an example — something that changes the way police treat people.”

Previous : Madagascar police, after months of investigation, arrest six over plot to kill president
Next : Pensioner dares driver ‘come out and see how f***ing old I am’ in parking row