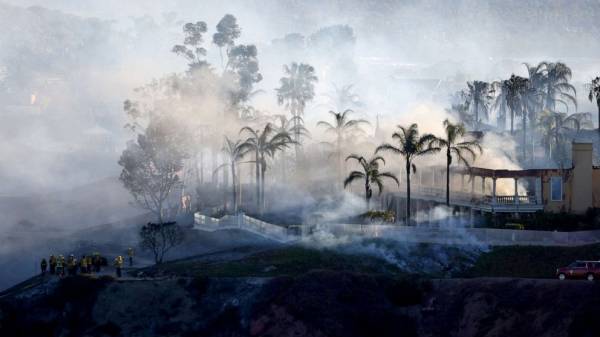 A fast-moving wildfire in Southern California that has destroyed more than 20 homes grew to approximately 200 acres as of Thursday morning, according to the Orange County Fire Authority.

The Coastal Fire, in the hills southeast of Laguna Beach, has spread quickly due to a combination of extremely dry brush and winds gusting from 25 to 35 mph.

One firefighter was injured fighting the blaze Wednesday. They were taken to the hospital in stable condition after suffering from a medical condition, Assistant Chief of Field Operations for the Orange County Fire Authority TJ McGovern said at a press conference Thursday.

Winds of 30 mph are common in the coastal hills of Southern California throughout the year, according to the National Weather Service.

However, the record dry start to the year in California is making the region extra vulnerable to wildfires. The first four months of 2022 were the driest start to a year in the state’s history, according to the National Oceanic and Atmospheric Administration.

Marcio J. Sanchez/APFirefighters work to put out a structure burning during a wildfire, May 11, 2022, in Laguna Niguel, Calif.

Gusty winds will continue for coastal Southern California. But these winds will not be unusual and there are no wind alerts for Orange County.

Further up the coast, north of Los Angeles, a high wind watch has been issued for gusts expected to reach nearly 65 mph.

Tim Wheaton via ReutersSmoke from a wildfire rises above a residential area in Laguna Niguel, Calif., May 11, 2022.

An evacuation warning has been lifted for the Balboa Nyes (Portafina) neighborhood in Laguna Beach, and those who chose to voluntarily evacuate can return to their homes, according to the sheriff’s department.

The city asked residents to remain vigilant overnight, but there is no immediate threat to the city of Laguna Beach from a vegetation fire burning in Laguna Niguel, according to the sheriff’s department.

A red flag warning has been issued from New Mexico to Nebraska, where critical fire danger if forecast on Thursday. Winds could gust to 65 mph with bone dry conditions.