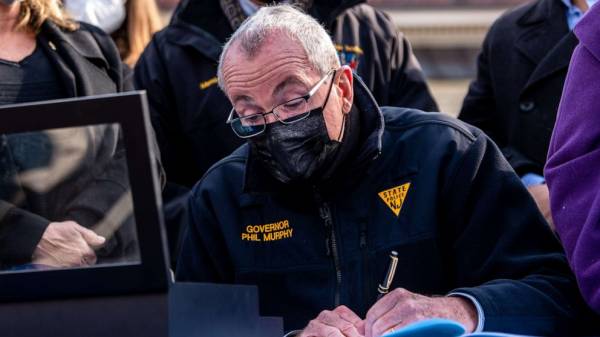 While the U.S. Supreme Court considers a case that could potentially overturn Roe v. Wade, some states are enacting or discussing protections for reproductive rights.

This week, New Jersey Gov. Phil Murphy signed a bill that codifies the right to an abortion, previously recognized by the state Supreme Court, into state law.

The so-called Freedom of Reproductive Choice Act, which quickly passed through the state legislature after first introduced on Jan. 6, grew out of concern that the conservative-leaning high court could overturn or limit Roe in the coming months through its decision on a Mississippi case, Dobbs v. Jackson Women’s Health, that asks the justices to directly reconsider the nearly 50-year precedent.

“The United States Supreme Court is preparing to take a wrecking ball to its own precedent, Roe v. Wade, and that would also demolish our case law-based foundation here in New Jersey. Neither I nor those with me today can let that happen,” Murphy said Thursday at a public bill signing. “Now, once I sign this bill, regardless of whether or not the Supreme Court overturns Roe v. Wade, New Jersey’s position in supporting the right to reproductive autonomy will remain clear and unchanged.”

The Democratic governor additionally signed a bill that requires insurers to cover 12 months of birth control prescriptions at one time.

Sarah Fajardo, policy director for the American Civil Liberties Union of New Jersey, called the two bills an “important step” for residents as the country is “experiencing a crisis related to reproductive rights access and equity.”

“These two bills not only declare the rights to abortion and reproductive autonomy in the Garden State, but expand much-needed access to contraception,” Fajardo said during Thursday’s bill signing.

Other states are also poised to address protecting abortion rights while the U.S. Supreme Court considers whether to uphold the Mississippi abortion ban.

The Vermont House of Representatives heard testimony this week on Prop 5, an amendment that would enshrine “reproductive autonomy,” including abortion, in the state constitution. If ultimately passed by the state legislature, the proposal could go before voters in November.

In California, lawmakers are expected this year to consider a plan to make the state a “sanctuary” for anyone seeking abortion services should Roe be overturned. The California Future of Abortion Council, which Gov. Gavin Newsom convened in September, has recommended that the state help cover the cost of the procedure, as well as transportation, lodging, child care, food and lost wages, for those seeking an abortion there.

After hearing arguments last month over the Mississippi law, which would ban most abortions after 15 weeks of pregnancy, the Supreme Court’s conservative majority appeared inclined to scale back abortion rights. A decision on the case is expected by the end of the court’s term in June.

Should the court overturn Roe, leaving the right to an abortion decided on a state-by-state basis, 26 states are “certain or likely” to ban abortion, according to a report published in October by the Guttmacher Institute, a pro-abortion rights research organization.

Among those, 21 states already have so-called trigger laws that would immediately ban abortion if Roe were overturned. The other five states are likely to ban abortion should Roe be overturned, the Guttmacher report said.

Fifteen states and Washington, D.C., currently have laws that protect the right to abortion, according to the institute.

Previous : Covid cases ‘plateauing’ in parts of England but one in 15 infected across UK
Next : Brits saw supermarket prices rise by £15 over Christmas as grocery sales hit £11.7bn