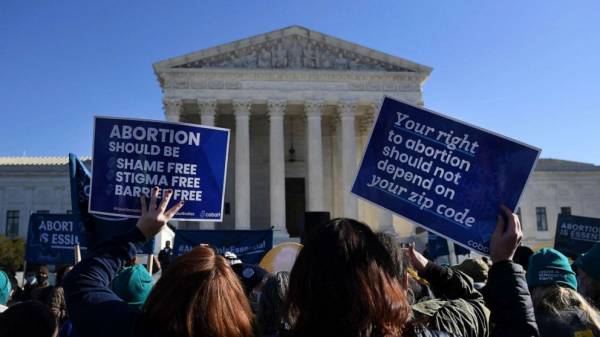 Some state lawmakers focusing on abortion access amid challenge to Roe v. Wade

Several state lawmakers are looking to expand abortion access this legislative session while a challenge to Roe v. Wade is before the U.S. Supreme Court.

Two bills out of Maryland and Washington aim to increase the pool of abortion providers operating in the states, which will likely see an increased demand for the service should the conservative-leaning high court overturn or limit Roe in the coming months through its decision on the Mississippi case Dobbs v. Jackson Women’s Health.

Washington state Sen. Emily Randall, the majority whip for the Senate Democratic Caucus, is the lead sponsor of a bill under consideration this session that would expand abortion providers recognized under state law to include physician assistants and advanced registered nurse practitioners, in addition to physicians.

“Abortion providers in Washington are rapidly preparing for the increase in women and people … who will drive hundreds of miles to Washington’s borders from our neighbors in Montana, Idaho, Oregon and Nevada, depending on what type of ban the Supreme Court institutes,” Randall said during a media briefing Thursday with the State Innovation Exchange, a strategy center that supports state legislators nationwide in advancing progressive policies. “That’s why this policy is more important than ever.”

“What we want to do is address what we see as a critical provider shortage and also affordability issues,” Kelly said during Thursday’s briefing, held two days before the 49th anniversary of Roe. “As we’re seeing an increased wait time for appointments, we can recognize that there’s a shortage of providers. In today’s climate, six months from now, I think we’re only going to see this getting worse.”

Kelly said that two-thirds of Maryland counties do not have abortion providers, particularly in rural areas, while the state is also seeing increased demand — including from patients flying in from Texas in the wake of a state ban on abortions after about six weeks of pregnancy. Helping Maryland residents access abortion care “more efficiently and effectively” may also help providers care for those coming from out of state, Kelly said.

Olivier Douliery/AFP via Getty Images, FILEAbortion rights advocates and anti-abortion protesters demonstrate in front of the US Supreme Court in Washington, Dec. 1, 2021.

Georgia Democratic state Rep. Park Cannon said she plans to introduce a resolution next week that addresses abortion access in the state, including for women of color, while a law that would ban abortion as early as six weeks in the state is being challenged in court.

“We need to resolve measures that say that Georgia has a strong commitment to the protection of reproductive health, rights and justice, which of course includes the right to safe and legal abortion care, but also the right to make reproductive decisions on your own,” Cannon said during the briefing.

Other states moving to protect abortion rights while the U.S. Supreme Court considers whether to uphold the Mississippi abortion ban include New Jersey, which last week enacted a bill that codifies the right to an abortion into state law.

The Vermont state legislature is also considering Prop 5, an amendment that would enshrine “reproductive autonomy,” including abortion, in the state constitution. If ultimately passed, the proposal could go before voters in November.

Meanwhile, states looking to restrict abortion rights include Florida, where state legislators are considering a bill that, like the Mississippi law before the Supreme Court, would ban most abortions after 15 weeks of pregnancy. Washington state Republicans have also introduced legislation this session that would roll back abortion access, including a bill that would make providing medical abortion methods a felony.

Additionally, voters in Kansas and Kentucky are expected to decide this year whether to amend their state constitutions to say there is no right to an abortion.

Chip Somodevilla/Getty Images, FILEProtesters, demonstrators and activists gather in front of the U.S. Supreme Court as the justices hear arguments in Dobbs v. Jackson Women’s Health, a case about a Mississippi law that bans most abortions after 15 weeks, in Washington, Dec. 01, 2021.

Last year, 108 abortion restrictions were enacted in 19 states, according to the Guttmacher Institute, a pro-abortion rights research organization. That’s the highest total in any year since 1973, when the Supreme Court legalized abortion with its decision in Roe v Wade, the organization said.

After hearing arguments last month over the Mississippi law, the Supreme Court’s conservative majority appeared inclined to scale back abortion rights. A decision on the case is expected by the end of the court’s term in June.

Should the court overturn Roe, leaving the right to an abortion decided on a state-by-state basis, 26 states are “certain or likely” to ban abortion, according to a report published in October by the Guttmacher Institute.