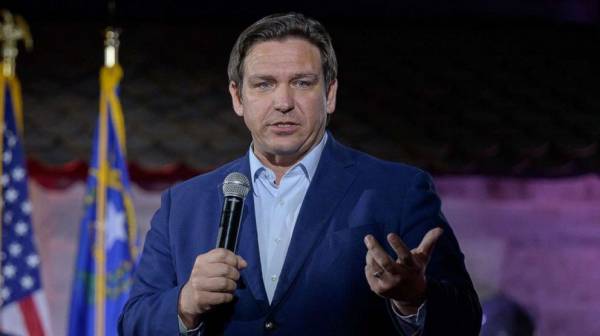 Several Republicans availed themselves of their time in front of a national audience to question Jackson about her philosophy around sentencing guidelines, to the frustration at times of the judge and Democratic lawmakers.

The words “pedophilia,” “grooming” and “child abuse” have also been tossed around by conservative figures and legislators in the debate about LGBTQ content, inclusion and treatment in schools.

Some Republicans seem to be resurfacing these false stereotypes as a political tool to rile up their base and further marginalize LGBTQ people, experts say.

The focus, the experts say, echoes the language used by the far-right conspiracy theory of QAnon, which promulgates the false notion that there is a secret cabal of Satan-worshipping pedophile power players who control the government.

“It’s yet another opportunity to exploit people who are feared, because they actually may obtain power,” said Susan Englander, historian at San Francisco State University.

“You’re gonna lie … you’re gonna give [voters] the worst-case scenario regarding what happens if these [progressive] things become normalized.”

The Parental Rights in Education law, what critics call the “Don’t Say Gay” law, spurred debate over whether young children should learn about the LGBTQ community in schools, with several legislators calling such lessons “indoctrination.”

Florida Gov. Ron DeSantis signed the bill in March to ban curriculum mentioning sexual orientation or gender identity in kindergarten through grade three “or in a manner that is not age-appropriate or developmentally appropriate for students in accordance with state standards.”

“We will make sure that parents can send their kids to school to get an education, not an indoctrination,” DeSantis said at the bill signing.

In a tweet, DeSantis’s press secretary, Christina Pushaw, claimed that anyone who opposes the Parental Rights in Education bill was “probably a groomer.” Grooming generally refers to when someone manipulates a person — typically a child or teen — in order to commit a sexual offense, according to the American Bar Association.

More than 6 in 10 Americans oppose legislation like the Florida bill that would prohibit classroom lessons about sexual orientation or gender identity in elementary school, according to a March ABC News/Ipsos poll.

DeSantis’ office did not respond to ABC News request for comment.

Shortly after, in April, a so-called “anti-grooming” protest by far-right extremists and conspiracy theorists took to the Disney World grounds where protestors falsely accused Disney, the parent company of ABC News, of helping groom children after the company criticized Florida legislators for implementing the so-called “Don’t Say Gay” bill.

Some conservatives have seemingly co-opted language used by far-right extremists such as those who espouse the QAnon conspiracy theories over the last several years.

Some lawmakers across the country have followed suit about this claim and others.

In Michigan, state Republican Sen. Lana Theis falsely claimed in April her Democratic colleague Sen. Mallory McMorrow wants to “groom” and “sexualize” kindergartners and teach “that 8-year-olds are responsible for slavery” in a fundraising email, according to Traverse City ABC affiliate WGTU.

In New Jersey, the National Republican Congressional Committee claimed Democratic Rep. Tom Malinowski was protecting pedophiles, an accusation he told Yahoo News was a ploy to rile up their QAnon base.

Rep. Marjorie Taylor Green, a Georgia Republican who continuously expresses support for a number of QAnon theories, called Democrats “the party of killing babies, grooming and transitioning children, and pro-pedophile politics” in April.

She believes the Republican Party is creating a politics of fear around supporting the queer community or the Democratic party — so even non-LGBTQ people question their allyship and affiliation with the Democrats as to not be falsely connected to pedophilia.

The RNC, however, has not officially used language on “grooming” or “pedophilia,” nor has it endorsed such attacks on Democrats. And other Republicans, including former Vice President Mike Pence and House Minority Leader Kevin McCarthy, R-Calif. have publicly denounced QAnon conspiracies.

The criminalization of the LGBTQ community

Historians say the sentiment being associated with this new wave of legislation about sexuality and gender identity, however, is reminiscent of a long history of the demonization of the LGBTQ community.

Sodomy laws, which have roots in some of the earliest laws of the U.S., made same-sex relations or sexual activity illegal.

Throughout the 1900s, historians say law enforcement had several avenues to pursue against LGBTQ people, via laws against disorderly conduct, indecency, loitering, lewdness and more.

Cross-dressing laws, which are believed to have first appeared in Columbus, Ohio, in 1848, also encouraged officers to harass and abuse trans or queer people for dressing in clothes that didn’t correspond with their biological sex.

In the 1930s through the 1950s, so-called sexual psychopath laws began conflating homosexuality with sexual psychopathy, according to Organization of American Historians LGBTQ committee board member and Sonoma State professor Don Romesburg,

In a 1950 study on these laws, it states that people deemed to be sexual psychopaths were considered people “with criminal propensities to the commission of sex offenses.” This included homosexuality.

These laws steered the narrative in painting LGBTQ people as a harm to society, people to be considered as dangerous, according to historians.

Even still, in the 1990s, anti-homosexual laws barred educators from discussing LGBTQ topics in many school classrooms. Some of these laws are still on the books today, enshrining anti-LGBTQ sentiment in school systems in Texas, Louisiana, Mississippi and Oklahoma.

This kind of rhetoric can have dangerous effects, historians say.

They say painting the community as criminals or predators will likely lead to violence and hate against LGBTQ people and allies. And after this talking point is abandoned by conservatives, the laws that arose from this will continue to impact lives:

“Long after those on the right have abandoned this tactic for the next rhetorical strategy that they move to, these laws will stay on the books,” Romesburg said.

Previous : Bloke who fell in love with own mum confessed to wife they have ‘mind-blowing’ sex
Next : Harry and Meghan ‘shouldn’t be focus of Jubilee’ says expert after Queen’s balcony ban