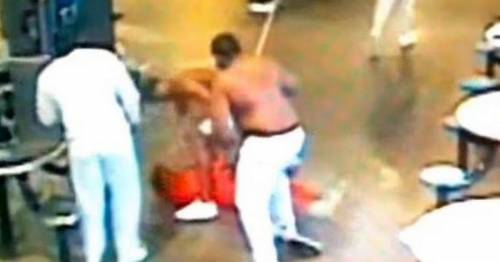 A video shows the moment a prison gang fiercely beat a man with a severe mental illness with whatever was at hand.

The clip shows Jayshawn Boyd, 22, who suffers from schizophrenia, standing in the mess hall of the Essex County Correctional Facility on September 23.

But suddenly a group of seven inmates dressed in white rush him from every angle and start punching him.

The guards on watch have been accused of failing to stop the brutal assault against a vulnerable inmate, the New York Post reports.

The 22-year-old doesn't last long against the fierce attacker before falling to the ground.

One of the assailants is seen grabbing an industrial broom and bringing it down with force on Boyd – who is still being beaten and stomped by the other men.

The men stop the violent attack briefly, and scatter. They go into the cells and reemerge with a number of household items.

One man smashes his foot down on Boyd's head. Another runs from a cell with a mop bucket filled with water and dashes it over him.

After another man violently heels him in the back of the head, a shirtless inmate chucks a garbage can at him. He then turns to grab a microwave which he throws repeatedly.

He is beaten with a mop bucket, microwave and an industrial broom
(

Others join in, picking up whatever they can to hit the mentally ill man lying still on the ground.

As the clip comes to an end, one of the callous attackers runs up to his blood-spattered body and clocks him once more with broom stick.

A lawyer representing Boyd says it's still unknown what prompted the vicious beatdown.

A lawyer for Brooke Barnett, representing Boyd, told the New York Post that it's unknown what prompted such a vicious attack.

He added: 'We just received a copy of the video from a family member, who received it anonymously.'

Licciardi pointed out that Boyd's hands were in the air when the first wave of attackers rushed him.

A lawsuit has been filed against Essex County – where Boyd's lawyers claim the schizophrenic inmate's Constitutional rights have been violated.

By putting him in a "gang unit", they say he has been subjected to cruel and unusual punishment as he is not a gang member.

His charges were for two domestic incidents involving his mum and brother.

In May he spent time in a psychiatric hospital while awaiting sentencing for the domestic assaults, according to NJ.com.

They have been hit with serious charges, including attempted murder and third-degree rioting after the October incident.