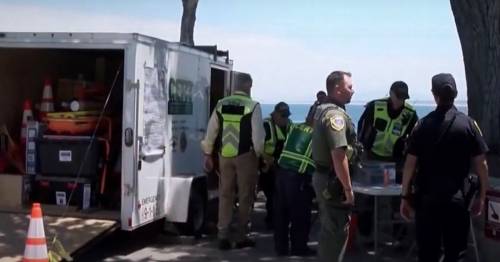 A swimmer was left with horrendous injuries after a devastating shark attack, according to police.

The mauling took place just off Lovers Point Beach in Monterey County, near San Jose, US.

Other swimmers were reported to have tried to save the man.

An aerial drone was used to look for the shark, however, it has not been seen again.

Police said all beaches in Pacific Grove beaches were closed until Saturday as a precaution.

Joe Amelia, a council member, said a man had received injuries to his stomach and a leg.

Californian shark attacks on humans are rare, the state Department of Fish and Wildlife said.

Warning signs and cordon were erected at the beach
(

The attack, however, is the second case this year where someone has been injured.

In the first attack, which happened at San Miguel Island in February, a diver suffered injuries to his foot.

An estimated 203 encounters have occurred between humans and sharks in California since 1950.

The latest incident was the 109th shark attack in which someone was hurt.

There was a struggle in the water involving the shark and surfer at Pacific Grove, San Jose
(

Two people have died in 2020 and six others have suffered nonfatal injuries in encounters with sharks in California, according to the Fish and Wildlife Department’s website.

Wednesday’s attack was the second recorded incident with a shark the location. the first was in 1952 where the victim died.

DNA tests will identify the type of of shark involved in Wednesday's incident.

The victim taken to to Natividad Medical Center, 23 miles from the beach where the incident took place.

The scene at Lovers Point Beach where the shark attack happened
(

it is not yet known what watersport the man was involved in.

Jenny McAdams, City of Pacific Grove Council member wrote to Facebook : “After the attack, the shark was seen again in the area.

“The beach has been closed, with everyone ordered out of the water.”

The Monterey Herald reports: “All beaches in Pacific Grove will be closed for at least 48 hours following a shark attack at Lovers Point this morning.”

It is not known if the victim was simply swimming in the sea when the attack happened around 11am.

Rhonda Navarro, an eyewitness to the horrific attack, told KION-TV the shark could be seen from above the water but that she couldn't recognise which type it was.

There have been 10 shark attack bites in the US this year, according to the website Tracking Sharks.

A surfer wa staken to hospital after a shark attack in Pacific Grove, US
(

in February a British expat who was mauled to death by a 15ft great white shark may have been targeted due to an unusual swimming habit he had, according to experts.

Diving instructor Simon Nellist was attacked on Wednesday afternoon in waters off the coast of Little Bay, Sydney, while training for a charity swimming event.

The 35-year-old RAF veteran, from Penzance, West Cornwall, was the Australian city's first fatal shark attack victim since 1963, with all of its beaches then temporarily closed.

Some experts have claimed Simon was likely mistaken for the great white's usual prey due to his dark wetsuit being mistaken for a seal.

Previous : Brit stuck in African island ‘hell hole’ prison with no food and water provided – World News
Next : Woman’s face burned off after being set on fire in gruesome attack in park