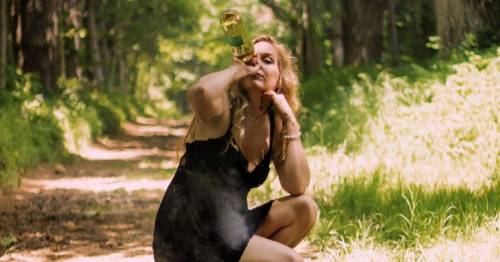 A woman scorned by a cheating husband doused her wedding dress in alcohol and set it on fire to celebrate their break up.

Chrissy Blake, 41, from Massachusetts, US, claims her ex-hubby cheated on her six times – with the first infidelity allegedly taking place before they tied the knot.

The 41-year-old hired a photographer to capture the moment she waded through a lake, stamped on and then scorched her $1,400 (£1,024) dress in a bottle of alcohol.

Hilarious photos show her dancing on a country lane as flames roar from the dress.

Another shows her stamping out the fire- leaving the flashy gown in a pile of smouldering ash.

Chrissy – who works as a nutritionist – hatched her plan after seeing other women doing the same on social media.

Chrissy said destroying her dress have her "closure"
(

She said destroying the country-themed gown gave her "closure" after a tough divorce.

Her and her former husband were together for seven years.

They were married for three before going separate ways in September 2020.

Chrissy claims her ex-hubby cheated on her six times and the couple tried marriage counselling.

Chrissy said: "I saw a divorce photo shoot and I just couldn't believe it, I had to do it.

"I thought it would give me closure and be a big f*** you. It looked so much fun.

"What else was I going to do with a wedding dress? I don't believe in selling them once they've been worn, my daughter wasn't going to want it.

"It was so satisfying, we absolutely destroyed that thing. We ripped it, got it in the water and burned it.

"My daughter came with me so it was a really fun day out and she loved it."

Chrissy claims that in March 2014, four months into their relationship, she discovered that her ex-husband hadn't ended a previous relationship until June that year.

She alleges that after they were married, she discovered he'd had 'flings' with four more women which lead the pair to attend marriage counselling.

After finding out about a sixth woman, Chrissy decided to end the relationship.

Chrissy said: "I received some messages from an ex about five months into the relationship.

"I didn't believe it and I didn't think he was that person.

"I just didn't believe anything that anybody was saying.

"We were already married by the time I found out about the second woman.

"One year into marriage we had marriage counselling but it doesn't work because the counsellor would tell him what he was doing and he wouldn't want to go again.

"I would go on his phone and see him talking to other women saying they were sleeping together but I wouldn't contact the women because they didn't know about me because he'd lied to them.

"I just felt devastated. I married this man and started a family with him.

"I'm not one to hold grudges. It was hard but it was a blessing."

Chrissy, who has two children, Dominique, 23, and Brayden, six, stomped on the dress, dragged it through the mud and waded through a lake in it before soaking it in wine and setting it on fire.

She said the gown had been her dream dress when she got married in a country themed wedding three years ago but after a tough divorce, she was happy to destroy it.

Chrissy's ex-husband said: "There's a whole lot of stuff that goes on in life and I'm not choosing to talk about it.

"There's a lot more that you don't know. A lot of things could come out that she doesn't want to come out."

Previous : Baosteel says it will fight Nippon Steel’s patent infringement claim
Next : Who is Olympian Agnes Tirop’s husband – and what is known about ‘suspect’ so far?