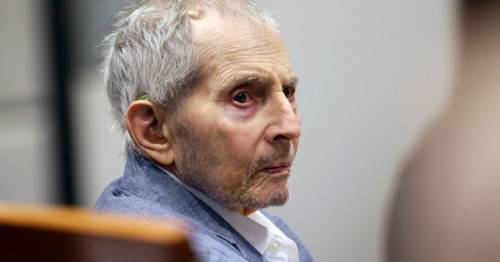 For more than half his life, wealthy real estate heir Robert Durst, who had died in prison, kept his dark secrets close to his chest.

But his good luck ran out after he accidentally confessed that he had "killed them all" in a TV documentary, sparking a new police investigation.

When his wife Kathie disappeared in mysterious circumstances in 1982 aged 29, he denied any involvement and she was later declared legally dead.

But the erratic businessman, who sued his brother for a £50million cut of the family fortune, continued to operate under a cloud of suspicion that he was a murderer.

He had previously been acquitted of murdering a neighbour – and lived a haphazard life, where he cut off relatives and bounced in and out of jail.

On January 10, it was announced that he had died after suffering from cardiac arrest while serving a life sentence.

In 2000, Durst's close friend Susan Berman, a crime journalist, was found shot in the back of the head at her cottage in Los Angeles.

Police only found the body after receiving an anonymous note in the post saying there was a "cadaver" at 1527 Benedict Canyon in 'Beverley' Hills, a misspelling of Beverly.

Once again, Durst maintained his innocence but his appearance in the real-life documentary The Jinx changed everything.

The documentary team found a letter from Durst to Susan in March 1998, where he had also misspelt Beverly as Beverley.

After confronting him with the evidence, he retreated to the bathroom where he seemingly forgot he was wearing a mic.

He was recorded speaking to himself, saying: “What the hell did I do?…Killed them all, of course.”

As the daughter of a mobster, Berman's murder was initially treated as a mob hit but records showed Durst had paid her $50,000, prompting suspicion she may have been about to testify against him.

He was arrested for Berman's death in 2015 on the same day the final episode of The Jinx, which examined his tumultuous life, aired.

He had been on the run for months, disguised as a mute woman in Texas, and was arrested after shoplifting a chicken sandwich, despite having thousands of dollars on his person at the time.

His lawyer claimed that the comments were edited but he found himself in hot water following the incident as it brought fresh scrutiny on the unsolved cases.

In court, prosecutors claimed Berman had planned to admit to police that she’d helped Durst cover up the 1982 killing of his wife Kathie McCormack.

He faced multiple health issues, including contracting Covid-19 during the trial and often appeared in a wheelchair.

But he was sentenced to life in prison over her murder in September last year and just a month later, prosecutors charged him with the murder of Kathie too.

Robert Durst (right) is pictured with Susan Berman, who was found dead in 2000
(

Durst went on the run in late 2000 after police re-opened the probe into his wife's disappearance and suspected death.

He rented a cheap apartment in Galveston, Texas, opposite neighbour 71-year-old Morris Black in 2001, and disguised himself as a mute woman called Dorothy.

Durst shaved his head and body hair, and wore a wig to evade suspicion but it was claimed Morris figured out who he really was.

In the documentary, Durst claimed his disguise was to "avoid media attention" over the new investigation into his wife's disappearance.

Blood evidence in Durst's flat led to his arrest but he was acquitted on the grounds of self-defence.

Black's head was never recovered and prosecutors claimed Durst dismembered him and threw his remains into Galveston Bay, where his torso and severed limbs were recovered.

Durst came from prosperous beginnings as the son of New York real estate mogul Seymour Durst and the brother of commercial developer Douglas Durst. He was worth an estimated $65million (£47m(.

The property-owning family have a huge portfolio which includes New York's One World Trade Centre.

But he became estranged from his family when his brother was chosen instead of him to run the family business.

The murderer's last mugshot, taken three weeks before his death, show him breathing aided by a tube.

In the photo, released by the California Department of Corrections on Wednesday, he looks pale and unwell.

Previously, lawyers had tried to postpone the case due to his health issues which included chest pains, breathing issues, pain from a catheter and urinary tract infections due to bladder cancer.

He contracted Covid-19 just after he was sentenced and was admitted to hospital.

He said it was from natural causes due to a number of health issues, his lawyer Chip Lewis said.

Previous : Mum, 18, filmed ‘tossing newborn baby with umbilical cord still attached’ into bin
Next : Line of Duty actor says some people ‘think we’re all the same but we’re not’