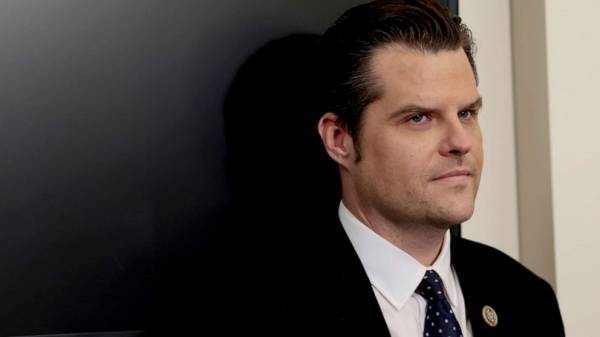 A former girlfriend of Florida Rep. Matt Gaetz, who is potentially a key witness in the ongoing federal sex trafficking investigation into the congressman, was spotted on Wednesday with her lawyer entering an Orlando federal courthouse where a grand jury has been meeting, according to a source.

The ex-girlfriend, who ABC News is not naming, could play a crucial role for investigators who are continuing to probe Gaetz’s alleged sexual conduct with a separate young woman who was 17 years old at the time.

Gaetz’s former girlfriend allegedly has knowledge not only regarding the congressman but also the one-time minor at the center of the sex trafficking investigation, sources said.

The ex-girlfriend, who previously worked on Capitol Hill, was also one of the women who was allegedly on a 2018 trip to the Bahamas with Gaetz and others, including the 17-year-old, which prosecutors are also investigating, according to legal sources familiar with the case.

A grand jury investigating the Florida congressman has been meeting at the Orlando courthouse on Wednesdays, according to multiple sources.

Anna Moneymaker/Getty ImagesRep. Matt Gaetz speaks at a news conference on Republican lawmakers’ response to the anniversary of the January 6th protest, Jan. 6, 2022, in Washington, D.C.

The news was first reported by NBC.

A spokesperson for Gaetz did not immediately respond to a request for comment. The Florida congressman has vehemently denied any wrongdoing and has not been charged with any crime.