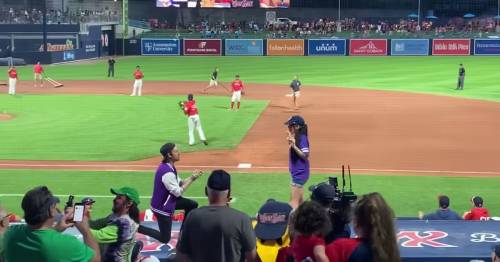 An excruciating video has emerged showing the moment a romantic marriage proposal failed spectacularly in front of hordes of fans at a baseball game.

The footage shows the agonising moment the gesture went horribly wrong as the proposed seemed to firmly reject the offer of marriage before running off into the stands.

In the excruciating video, posted on Instagram, an unnamed man is seen bent on one knee proffering a ring to a woman, who are both dressed in sportswear and baseball caps.

As the gesture was made in front of the crowds the woman can be seen quickly shaking her head and covering her mouth.

She then turns to the stands before unceremoniously darting off into the crowd and disappearing.

The moment the disaster proposal was rejected
(

Speaking to radio station 98.5 The Sports Hub about the awkward moment a fan who was there in the stands said: "The woman was horrified after the proposal.

"She ran up the stairs. The gentleman ran after her with two of his buddies. I saw the whole thing. It was horrifying.”

Reaction to the original video, which has been shared tens of thousands of times, has been equally fierce.

One wrote: "Jesus Christ I got second hand embarrassment from this."

Another Instagram poster said: "This situation is exactly why a man needs to be 100 per cent certain that the woman they want to spend the rest of their life with is giving off the same vibes the man had when it comes to love.

"If the girl truly didn’t love him or she’s cheating she should of [sic] left a long time ago. Other than that she probably not ready for such commitment."

Another said simply: "Love is dead."