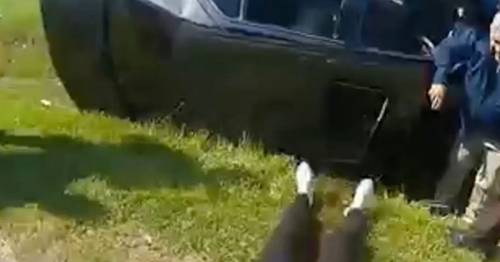 The final moments of a former prison guard who went on the run with her convict lover were caught on police audio before she allegedly shot herself.

Vicky White can be heard telling inmate and murder suspect Casey White they should "get out and run" after their car was cornered following a chase.

The 56-year-old had sprung the dangerous 6ft9in prisoner, 38, from Lauderdale County jail in Alabama, US, on April 29 before they spent 11 days on the lam.

But after their Cadillac was spotted by chance as a local detective in Evansville, Indiana, headed home for the day their life on the road came to an abrupt end.

Casey quickly surrendered and was hauled back to prison where he had already been serving 75 years and was awaiting trial for murder.

The 911 audio, obtained by NewsNation, appears to capture Vicky saying: “Airbags are going off! Let’s get out and run!”

Sirens can be heard in the background.

Moments later she turned a gun on herself.

Vicky White took her own life after the crash
(

Vicky White was a prison guard before going on the run
(

“The manner of death has been ruled a suicide,” the coroner’s office said.

Vicky is said to have still been breathing and holding the gun when officers surrounded the car, which had flipped on its side after being rammed.

“She still has the gun in her hands,” one officer is heard saying. “Finger’s on the trigger.”

Casey White referred to Vicky as his 'wife' to police
(

“His immediate words to our team was, ‘Please help my wife. She just shot herself in the head,'” Mr Hunt told reporters.

However, authorities said there is no evidence that the two were actually married or related, despite their matching surnames.

Evansville police Detective Darren Richardson had tracked down the fugitives after investigators received a tip off about the type of car the couple were driving and the possible area.

The convict was returned to prison on Tuesday
(

He has been charged with first-degree escape
(

He had been checking hotels and other places he thought they might have been staying at when he spotted the car shoot past as he headed home for the night.

He alerted the US Marshals Service and gave them the number plate.

He told 44News : “Law enforcement, it’s their job to go out and catch the bad guys, especially when you got two fugitives on the run for as long as they were."

Vanderburgh County Sheriff David Wedding said the fugitives had been hiding at a Motel 41 in the town, having paid a homeless man to rent them a room in his name.

Casey is understood to have been returned to Alabama on Tuesday night.

At his arraignment, Judge Ben Graves informed him that he will be charged with first-degree escape.

Previous : Police lassoe and ride rogue alligator after ferocious reptile spotted outside school
Next : Lewis Hamilton warned he could be banned from Monaco Grand Prix