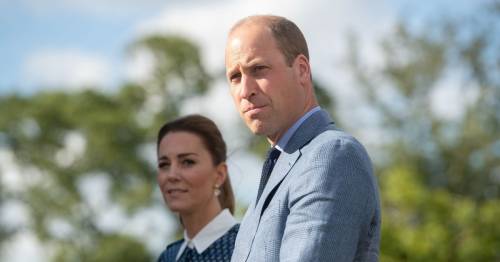 Prince William comforted the partner of a police officer who died after being assaulted by pro-Trump rioters during the Capitol riots sending a moving letter.

The Duke of Cambridge wrote to Sandra Garza, the girlfriend of Brian Sicknick, 42, following the officer's death after the January 6 insurrection last year.

Sicknick was one of the on-duty officers outnumbered by thousands of rioting Trump fans who stormed the US Capitol building as they attempted to overthrow democracy.

During the violence, the officer was sprayed with a chemical and collapsed a day later. He suffered a stroke and died.

In the letter, Prince William, 39, wrote to Garza: "Please forgive me if I am intruding but I wanted to write and let you know how sorry I am about the death of your partner, Brian.”

The Duke told how he seen footage of the “harrowing events that took place at the Capitol” and wanted to pay tribute to Sicknick's “patriotism and selflessness”.

He added: “By all accounts, Brian performed valiantly whilst on duty and despite suffering injuries continued to do his utmost to protect those inside.”

William said he hoped it gave Garza some small comfort to know that “thanks to law enforcement officers like Brian that the situation did not escalate further and democracy was upheld”.

“I know that words cannot hope to provide comfort to you at this dreadful time but I wanted to let you know that Brian's family are very much in my thoughts,” he continued.

In revealing the letter to CNN, Garza told how former President Donald Trump had not sent her a message of condolence.

“Trump does not give two c***s about law enforcement or Brian and yet Prince WIlliam took the time to honor me and Brian,” she said.

She said the prince is a "beautiful, wonderful person"
(

She then went on to say about the prince: "I just think he is just a beautiful, wonderful person.”

The release of William's tribute to Sicknick, which was dated September 2021 but did not reach Garza until recently.

Two other officers took their own lives in the days after the riots, and more than 150 police officers were hurt – including one officer who had a heart attack and others who suffered traumatic brain injuries and permanent disabilities.

The letter in full
(

Some have yet to return to duty and may never.

Currently, the U.S. House Select Committee on the January 6 Capitol riot hearings are ongoing with the next round scheduled for June 21.

Previous : Funfair guests stuck 130ft in air as ride breaks down leaving them ‘white as a sheet’
Next : Rafael Nadal planning to play Wimbledon as he looks to extend his Grand Slam streak