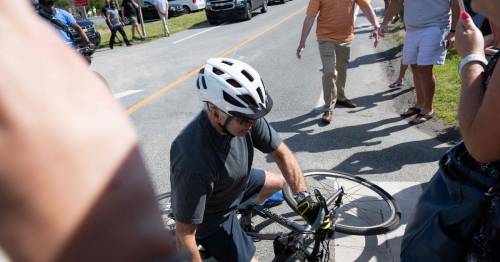 US President Joe Biden fell from off his bike as he took a ride near his Rehoboth Beach, Delaware, holiday home.

Secret Service agents swarmed the 79-year-old and helped him to his feet,.

“I’m good,” Biden said, telling pool reporters that he had had trouble taking his biking shoes out of the pedals as he tried to stop and chat with well-wishers eager to meet his dog Commander.

President Biden told reporters that he had trouble removing his shoes from the bikes' pedals, causing the fall.

The US leader had come over to greet a crowd gathered near the Gordon's Pond State Park bike trail.

Many in the crowd yelled "Happy Father's Day" to the US President.

When trying to dismount the bike, Joe Biden's shoes caught and he fell over sideways, causing a mad scramble of Secret Service and press trying to help him up.

He then started greeting the crowd, even bringing one woman out to meet first dog Commander, who being walked nearby.

US President Joe Biden fell from off his bike as he took a ride near his Rehoboth Beach, Delaware, holiday home
(

The gaffe was reminiscent of the President's trip last month on the stairs of Air Force One in Illinois – which itself harked back to an incident last year in Atlanta, where the president fell over on the plane's steps three times.

The cycling fall comes after the US Pre sident recently called on fellow Americans to pressure members of Congress to pass sensible gun laws.

An 18-year-old gunman opened fire at an elementary school in the small city of Uvalde, west of San Antonio, killing at least 19 children and two adults, before being apparently shot dead by police officers.

In the wake of the horrific incident on Tuesday, Mr Biden demanded action be taken, but it was not clear what action he will take nor did he call for a specific vote in Congress or policy.

“I hoped when I became president I would not have to do this, again,” a visibly shaken Biden said, decrying the death of “beautiful, innocent” second, third and fourth graders in “another massacre”.

Biden, whose own life has been marked by family tragedy, said the parents in Texas “will never see their child again, never have them jump in bed and cuddle with them,” he said.

He asked Americans to fight the feeling of powerlessness from seeing yet another mass shooting.

“I am sick and tired. We have to act. And don’t tell me we can’t have an impact on this carnage.”

Mass shootings in America are often followed by public protests and calls for action by Democratic politicians, but federal gun safety policies like background checks that are common in other countries have failed in the face of strong Republican opposition.

The United States experienced 61 “active shooter” incidents last year, up sharply from the prior year and the highest tally in over 20 years, the FBI reported this week.

The shooting poses for Biden, already facing the lowest approval ratings of his presidency, another crisis on top of 40-year high inflation rates and the war in Ukraine.

A mass shooting in a New York grocery store 10 days ago increased pressure on the Biden administration to make good its vow to crack down on gun violence, and the killing of elementary school children is likely to increase that pressure.

Previous : Arsenal’s No.14 shirt: A complex history as Eddie Nketiah takes on lofty expectation
Next : Care homes residents left to starve during Covid pandemic as grandad became ‘a skeleton’