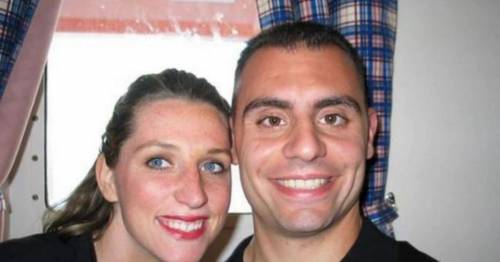 A husband has been convicted of murdering his wife after her Fitbit revealed he was lying about her death.

Richard Dabate, 45, told police that a man had broken into their home, tied him up and shot his wife Connie dead.

But data from Connie's fitness device proved that this was not true, as she was still moving around the house in Connecticut, US, an hour after he claimed she died.

Prosecutors said he planned the murder of his wife in 2015 as his lover was due to give birth to his child, and his life was about to unravel.

Dabate was found guilty of murder, tampering with evidence and making a false statement.

The killer had claimed that a masked man dressed in camouflage gear and with a voice like actor Vin Diesel had broken into their home in Ellington, Tolland County.

Husband Richard plotted the killing as his life was about to unravel, jurors were told
(

He told police that he had left for work on the morning of December 23, but returned to discover an intruder in his home.

But data from the fitness tracker showed that Connie, who was 39 when she died, was strolling around the house at a leisurely pace for an hour after her husband claimed she was dead.

Dabate could now face up to 60 years behind bars, CBS News reports.

He said Connie was killed at around 9.05am, but her Fitbit and data from her phone showed she went out to a local YMCA centre and did not return until 9.18am.

Her last movement was at 10.05am, and there was no sign that she had tried to run from her attacker, NBC Connecticut reports.

Dabate, left, could face up to 60 years behind bars for the murder
(

There was no sign of forced entry to the home.

Dabate was found tied to a chair by police, while his wife's body was discovered in the basement, having been shot in the head and abdomen.

He claimed that she had gone to the basement to retrieve one of his guns after he alerted her to an intruder.

Wayne Rioux representing Connie's family, said after the verdict: “The trial was not about Fitbit.

“The trial was about the cold-blooded, planned murder of Connie Margotta Dabate.

"There will be no closure for the Margotta family, but there is finally justice for Connie.”

Dabate’s lawyer Trent LaLima said the defendant would be appealing the result, The Independent reports.

He claimed that the Fitbit tracker should not be relied on, as it was not designed to be accurate enough to be relied on in court.

The defence lawyer said unknown DNA had been found in the home, including on the murder weapon – and added that a cleaner may have seen a figure dressed in green move past the window when it happened.