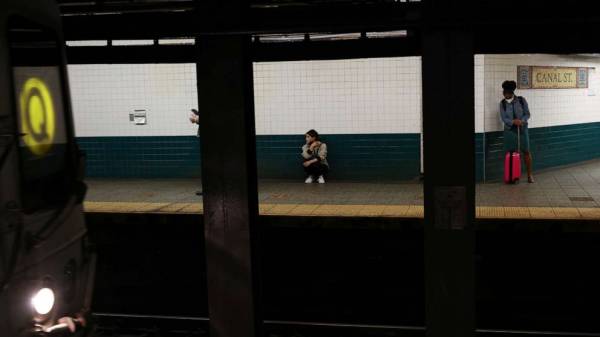 Police searching for gunman in fatal shooting on NYC subway

New York City Police officers are searching for a gunman after a subway passenger was shot and killed in what investigators describe as an unprovoked attack.

The suspect was pacing back and forth in the last car of a Manhattan-bound Q train as it crossed over the Manhattan Bridge around 11:45 a.m. Sunday when he pulled out a gun and “without provocation” fired it at a 48-year-old passenger at close range, striking him in the chest, witnesses told investigators, NYPD Chief of Department Kenneth Corey announced at a press conference.

When the train pulled into the Canal Street station — the first Manhattan stop on the Q line — the suspect fled, Corey said, describing him as dark-skinned with a beard and “heavy-set” and last seen wearing a dark-colored sweatshirt, gray sweatpants and white sneakers. He is still at large.

Emergency responders attended to the victim at the scene, Corey said. He was transported to Bellevue Hospital, where he later died. His identity has not yet been released.

John Minchillo/AP, FILENew York City Police Department personnel gather at the entrance to a subway stop after a shooting in the Brooklyn borough of New York, April 12, 2022.

No others were injured in the shooting, Corey said.

Preliminary information suggests there was no prior contact between the victim and suspect, Corey said.

Witnesses who may have photos or video of that altercation are asked to share them with investigators.

WABCLaw enforcement hold a press conference after a shooting incident on the Q Subway train at the Canal Street station in New York, May 22, 2022.

On April 12, 10 people on board the N train were shot as it approached the 36th Street station in Brooklyn’s Sunset Park neighborhood. The alleged gunman, Frank James, is being held without bail on charges of carrying out a terror attack against a mass transit system and discharging a firearm during a crime of violence.

Corey said Sunday that the NYPD is committed to protecting the city’s mass transit system and will continue to place officers at stations and aboard trains on patrol.

Shannon Stapleton/Reuters, FILESubway riders wait for a train at the Canal Street station in the Chinatown section of Manhattan in New York, Oct. 12, 2021.

“We put a lot of additional officers down into the subway system,” he said. “We continue to do that to patrol this very extensive transit system that we have.”

Previous : Unions warn of ‘summer of discontent’ as Tories threaten tougher laws to prevent strikes
Next : Hundreds of passengers stranded in Greece after TUI cancels flight back to UK twice