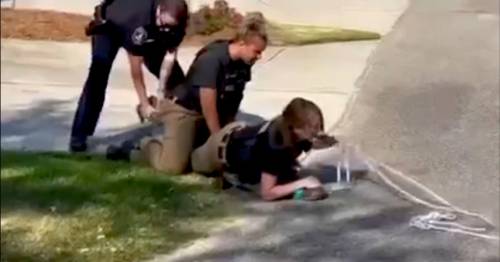 Police lassoed and rode a rogue alligator outside a school in astonishing footage.

A trio of officers were called to a school in Charleston, South Carolina, after the ferocious beast had been spotted close to the gates.

The rodeo-style capture happened outside Daniel Island School and shows cops cornering the animal – which resulted in footage reminiscent of a scene from an action movie.

Modest police chiefs later shrugged off the drama, but they did admit it was "not your everyday arrest".

Officers can be seen cornering the 'gator on the drive of a house close to the school.

One female officer manages to rope the huge reptile with a lasso on its upper jaw.

She started to reel it in, but the alligator snaps its lethal jaws and thrashes its head from side to side.

A male officer then takes the rope and two female officers are seen straddling the creature before dropping down on top of its back, trapping it under their combined body weight.

The trio only just manage to close the animal's tooth-lined gaping jaw before it starts biting at them.

The City of Charleston Police Department said cops never know what they may encounter in their line of work.

They added on 10th May: "Not your everyday arrest! Check out this video of our Animal Control Unit removing an alligator outside of Daniel Island School.

"Our team showed no fear and got the job done!

"You never know what you'll encounter as an officer!"

In October The Mirror told how an alligator tried to snatch the fish he had just caught.

Dawson McMahon was thrilled with his catch as his dad filmed the big moment.

Capturing the seven-year-old reeling in the bass in the family's back garden on the Palm Coast, Florida, they had no idea danger was lurking inches under the water.

Dad Sean can be heard "It's alright, buddy, keep going!" as he completes the catch.

The lad steps closer and closer to retrieve his prize as his dad videos him making the retrieval.

Inside a second, a massive alligator rushes out of the water and snatches the boy's fish in his mouth.

The beast was metres away from the child and dragged his pole into the water.

It caused the boy to jump back in alarm and his dad – still filming – simply says "Oh… my….God."