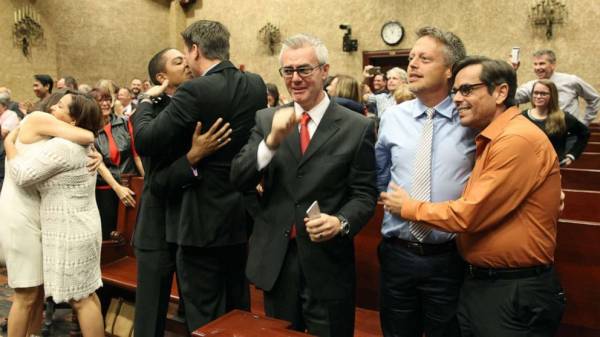 Police are looking for clues into the murder of a prominent figure in Florida’s LGTBQ community.

Jorge Diaz-Johnston was found dead in a Jackson County Landfill over the weekend, the Tallahassee Police Department announced Wednesday evening.

Diaz-Johnston, 54, was reported missing on Jan. 3 near his workplace and police are investigating his death as a homicide, according to a police spokesperson.

Diaz-Johnston was one of the plaintiffs in a 2014 lawsuit against the Miami-Dade County Clerk’s Office, which refused to issue same-sex marriage licenses. A Miami-Dade Circuit judge sided with the couples.

A year later, the state dropped its ban on same-sex marriage.

Diaz-Johnston was the brother of Manny Diaz, the former Miami mayor and current chair of the Florida Democratic Party.

Equality Florida, which organized the 2014 lawsuit, said in a tweet Thursday that its members were heartbroken to learn of Diaz-Johnston’s death.

“He and his husband Don were two of the brave plaintiffs who took on Florida’s anti-gay marriage ban and helped win marriage equality for all Floridians. Our deepest condolences to Don and Jorge’s extended family,” the organization tweeted.

Police said they have not identified any suspects nor determined a motive behind the homicide.

Investigators are asking anyone with any information to call Crime Stoppers at 850-574-TIPS.