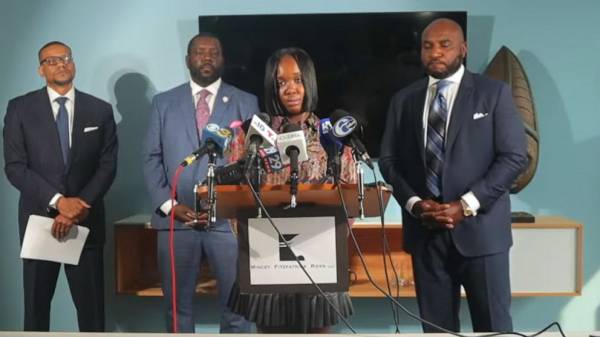 Philadelphia pays $2 million to woman beaten by police, separated from her son

The city of Philadelphia has agreed to pay $2 million to Rickia Young, who was pulled from her vehicle, beaten by police and separated from her 2-year-old son in October 2020, according to the mayor’s office.

The incident occurred as anti-police brutality protests after the police shooting that killed Walter Wallace Jr were happening throughout the city.

Young, her 2-year-old son, and the 16-year-old son of a friend were driving through West Philadelphia on Oct. 27, 2020, when she came across protesters blocking the street in a standoff with police, who ordered Young to turn back. As she began to turn the car around, Young’s attorneys said she paused so she didn’t hit protesters running by her car.

Mark Makela/Getty Images, FILEDemonstrators gather in protest near the location where Walter Wallace, Jr. was killed by two police officers on Oct. 27, 2020, in Philadelphia.

Young’s attorneys said officers swarmed her vehicle and broke her windows with batons and then opened her car door, pulled Young and the 16-year-old from their seats and began to hit them. Young was detained by police, and her 2-year-old son was taken away from her.

The teen is not involved in the $2 million settlement.

Young also said the National Fraternal Order of Police used a photo of her son after he was taken away from her during the incident and used it on social media to promote pro-police messaging online.

National FOP spokesperson Jessica Cahill told the Associated Press that the post was quickly taken down when it learned about the actual story behind the photo. The National Fraternal Order of Police did not immediately respond to ABC News’ request for comment.

“I will never forget what those officers did to us that night,” Young said in press conference on Tuesday. “I hope that the officers responsible will never have the chance to do something like this to another person ever again.”

Young suffered from swelling on her face and body, as well as a swollen trachea, according to her attorneys. The beating was caught on a cellphone camera and went viral online.

“The behavior that occurred during the interaction between Rickia Young, her nephew, her son, and some of the officers on the scene violated the mission of the Philadelphia Police Department,” Police Commissioner Danielle Outlaw said in a statement to ABC News.

Gabriella Audi/AFP via Getty Images, FILEProtesters march through West Philadelphia on Oct. 27, 2020, to protest the fatal shooting of 27-year-old Walter Wallace, a Black man, by police.

Two officers have been terminated in connection with the incident, according to the office of Philadelphia Mayor Jim Kenney. There are also 14 members in the department awaiting disciplinary hearings as a result of an internal investigation into the incident.

“The ability for officers and supervisors on the scene to diffuse the situation was abandoned, and instead of fighting crime and the fear of crime, some of the officers on the scene created an environment that terrorized Rickia Young, her family, and other members of the public,” Outlaw said.

Kenney said he hopes the settlement and investigations into the officers’ actions can bring closure to Young and her family.

“This terrible incident, which should have never happened to anyone, only further strained the relationship between the police department and our communities,” Kenney said in a statement to ABC News. “The officers’ inexcusable actions that evening prompted an immediate and thorough investigation of the incident and for personnel to be disciplined and held accountable for their egregious conduct.”

Photo Image Press/Shutterstock, FILEPhiladelphia Police Commissioner Danielle Outlaw speaks to a member of the press during a National Night Out event in Philadelphia, Aug. 3, 2021.

Mincey is calling on the district attorney to take more action against the officers involved.

“The district attorney Lawrence Krasner needs to file criminal charges against the officers who were involved,” Mincey said. “If any citizen did something like this, there would be no question they will be charged with aggravated assault as a felony.”

Krasner has not said whether he will pursue a criminal case against the officers.