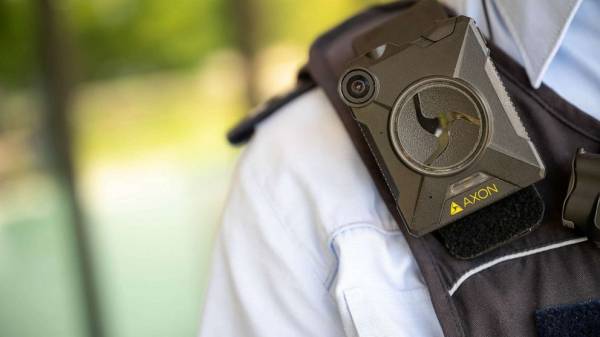 A Philadelphia police officer is under internal investigation for allegedly deleting a suspect’s cell phone video during an arrest.

On the night of March 23, Jacob Giddings was sitting in a vehicle at a gas station when he was approached by police. According to the suspect’s attorney, Lennon Edwards, an officer asked him for identification but did not offer an explanation for the request.

The officer then opened the door to Gidding’s car, and Giddings told the officer he was going to record the incident, Edwards said.

Body camera footage shared with ABC News appears to show Giddings and another man recording the officers as he sits in his vehicle, saying, “I got you on camera, go ahead and grab me again.” The officer then appeared to grab and pull Giddens out of his car. Edwards said the phone fell during the altercation.

Picture Alliance via Getty Images, FILEAn Axon body camera is worn on the shoulder of a law enforcement office in a July 14, 2020 file image.

Giddings was then arrested. Edwards said there was a warrant out for Giddings’ arrest for an incident in November 2020, but he said his client had no knowledge of it.

Bodycam footage also appears to show the officer picking up a phone from the ground and deleting a video from the device. Edwards said Giddings asked what happened to the video, or if it was still on the phone, and the officer said he didn’t know.

“[The officer] knows what he did, and the two officers standing there know what he did,” Edwards said. “And none of them, none of the three officers say anything. They are all complicit in violating Mr. Giddings’ rights in tampering with evidence.”

Philadelphia Police Commissioner Danielle Outlaw told ABC Philadelphia affiliate WPVI that the officer has been on restrictive duty since April pending the outcome of the internal investigation into the incident.

Edwards said police reform is a priority in Giddings’ case. He is also seeking monetary damages.

“We’re looking for a serious reaction by the people who were supposed to do something, beginning with the department where he worked and moving on up the ladder,” Edwards said. “What this officer did was deleting evidence. He is essentially tipping the scales of justice in his favor.”

The PPD Office of Public Affairs declined to comment further on the investigation.