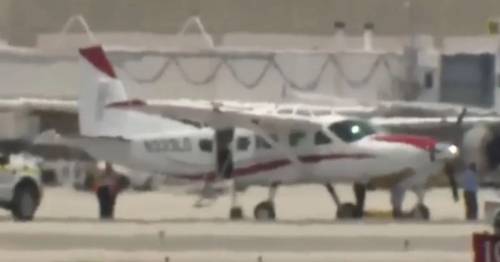 A passenger with no idea how to fly a plane was forced to step in when the pilot suddenly fell ill.

Air traffic controllers helped the man – who has not been identified – guide the 14-seater Cessna Caravan to land at Palm Beach International Airport in Florida, US.

It is believed the impressive feat could be the first of its kind in history.

The utility aircraft was around 70 miles north of the airport when the passenger called controllers to tell them the pilot "has gone incoherent".

He was told to keep the wings level and follow the coast before he was coached to the ground during the nail-biting ordeal on Tuesday afternoon.

“I’ve got a serious situation here,” the passenger was heard saying over the radio.

“My pilot has gone incoherent. I have no idea how to fly the airplane.”

Controllers asked for his position and he said he had "no idea" but that he could see the Florida coast in front of him.

He was told to follow the coast while they tried to locate the plane.

It was then spotted around 25 miles from Palm Beach.

Following the successful landing, a controller is reported to have said: "You just witnessed a couple passengers land that plane."

“Oh, my gosh. Great job,” said the other person.

He said: “This is the first time I’ve ever heard of one of these [Cessna Caravans] being landed by somebody that has no aeronautical experience.

"The person on the airplane who had no aeronautical experience listened very carefully and obviously followed instructions with great calm.

"That’s what made the difference," he added.

The Federal Aviation Administration continues to investigate what happened to the pilot.

Previous : Al Jazeera journalist shot in head by ‘Israeli forces’ while reporting from West Bank – World News
Next : ‘Boris Johnson is leading Britain into hardship and ignoring those who need help’ – Voice of the Mirror