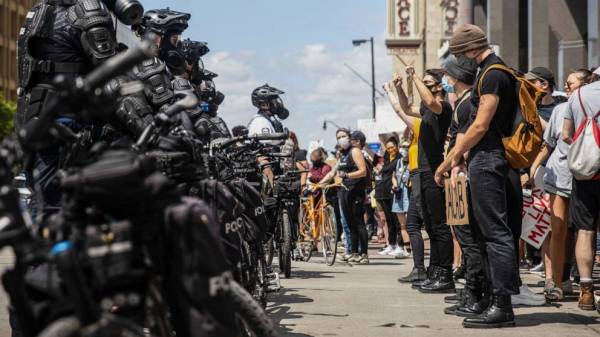 Special prosecutor Kathleen Garber, who was appointed by the City of Columbus to independently investigate complaints against members of the Columbus Division of Police during last year’s demonstrations, announced charges of dereliction of duty against the three officers, including two who face counts of assault and interfering with civil rights.

All of the charges are misdemeanors, Garber said in a statement.

“I was asked by the City of Columbus to independently evaluate the allegations of police misconduct from last summer’s protests so that both citizens and police officers are held to the same standard of accountability,” Garber’s statement read.

Garber said the investigation, which she is conducting with retired FBI agent Rick Wozniak, is ongoing and that other officers could be charged.

SOPA Images/LightRocket via Getty Images, FILEProtesters confront police officers standing in the middle of the street in Columbus, Ohio, during a demonstration against the murder of George Floyd under police custody, May 30, 2020.

Shaw and Walls, the two officers charged with misdemeanor assault and interfering with civil rights, are accused of pepper-spraying peaceful protesters during demonstrations that occurred on May 29 and 30 in downtown Columbus last year, according to Garber.

One protester, according to an affidavit written by Wozniak, claimed to be walking home with two female friends on May 30 when Shaw allegedly confronted them blocks away from where a demonstration was going on in downtown Columbus.

“This female officer (later identified as Shaw) got out of her car and walked right toward us and pepper-sprayed us,” the protester said, according to Wozniak’s affidavit. “We did not provoke the officer at all.”

Wozniak said cellphone video taken of the incident by a witness supported the allegations.

“A video taken during this protest showed Shaw exiting her Columbus Police Department marked cruiser, walking up to individuals on the sidewalk and pepper-spraying these individuals,” Wozniak wrote in his affidavit.

Walls was working as a bicycle police officer on May 30 when his own body camera showed him allegedly “pepper-spraying peaceful protesters who were standing on the sidewalk” in downtown Columbus, according to Wozniak’s affidavit. One of the protesters claimed he was pepper-sprayed by Walls as he was trying to help a demonstrator who had already been sprayed, according to the affidavit.

Kanode claimed that she assisted in the arrest of a female protester on May 30, 2020, after the demonstrator grabbed ahold of another officer’s equipment and tried to jerk him to the ground. A review of Kanode’s own body camera video contradicted the sergeant’s statement, according to Wozniak’s affidavit. In addition to the charge of dereliction of duty, Kanode is charged with the falsification of a report.

SOPA Images/LightRocket via Getty Images, FILEA group of police officers in riot gear walk down the street in Columbus, Ohio, during a demonstration in response to the death of George Floyd at the hands of a Minneapolis police officer, May 30, 2020.

Columbus Mayor Andrew Ginther said the police response to protests did not meet his or the community’s expectations.

“And while we were quick to make changes to our approach to nonviolent demonstrations — including use of force and chemical agents — the fact is some Columbus police officers acted outside policy, abused their authority and may have committed crimes,” Ginther said in a statement on Wednesday.

Columbus Public Safety Director Ned Pettus Jr. added, “This is important, necessary work. Answers and accountability are what the people of Columbus demand and deserve.”

Attorney Mark Collins, who represents all three officers, told ABC News on Wednesday that he is “disappointed they are being made scapegoats by the city.”

Collins said Shaw is a use-of-force trainer at the Columbus Police Academy and has been called to give expert testimony on behalf of the city in federal lawsuits.

He said the officers, who have all been placed on paid administrative leave, plan to vigorously fight the charges. Collins said the officers will plead not guilty at their arraignment on July 8.

In a statement to ABC News, Jeff Simpson, executive vice president of the Fraternal Order of Police union in Columbus, said, “Our officers are some of the best trained in the country, and we welcome the accountability that comes with our job.”

“The Columbus Police Officers who have been charged with misdemeanor misconduct have the constitutional right to due process and are presumed innocent until proven guilty,” Simpson said. “We believe the officers acted appropriately within the scope of their duties.”