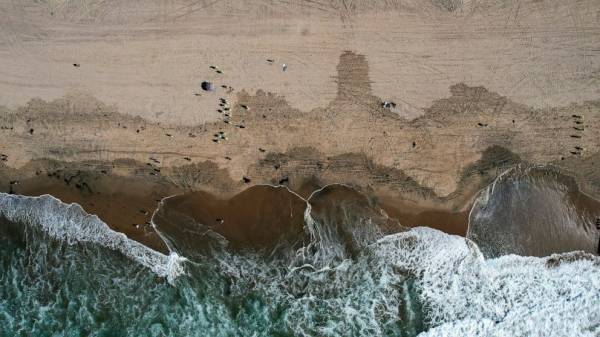 HUNTINGTON BEACH, Calif. — An oil sheen spotted in the ocean near last month’s crude pipeline leak off Southern California dissipated within hours, but its source remains a mystery, authorities said.

The U.S. Coast Guard on Saturday dispatched aircraft and boats to investigate the oil sheen measuring about 70 feet (21 meters) by 30 feet (9 meters) off the coast of Orange County.

The source of the sheen was not immediately determined, and it was not known when it was first spotted, the Orange County Register reported.

As of about 2 p.m. Saturday, the sheen was no longer visible, said Jenna Driscoll, liaison officer with the California Department of Fish and Wildlife. Coast Guard officials said Saturday night that the sheen had not reappeared and that they would continue monitoring the area.

“It could be nothing, it could be something, but we want to be sure we get an investigation out quickly,” Orange County Supervisor Katrina Foley told the Register on Saturday. “We don’t want to repeat what happened last time.”

The sheen spotted Saturday was located in the same area where an underwater pipeline owned by Houston-based Amplify Energy leaked up to about 25,000 gallons (94,635 liters) of crude on Oct. 2. Oil washed ashore, tarring the feathers of dozens of birds and leading to rescues of marine mammals.

The impact of the spill was less than initially feared, but it affected local wetlands and wildlife and shut the shoreline in surf-loving Huntington Beach for a week.