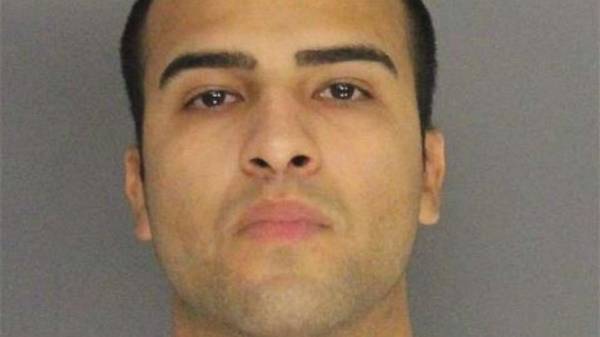 A New Jersey police officer faces a slew of charges after allegedly striking a pedestrian on a parkway, leaving the scene and then taking the victim’s body to his home.

Newark Police Officer Louis Santiago, 25, has been charged with reckless homicide, desecrating human remains and other related charges after striking a pedestrian on the Garden State Parkway, according to a statement Thursday from Acting Essex County Prosecutor Theodore N. Stephens, II.

On Nov. 1 around 3 a.m., Santiago allegedly struck the victim with a 2005 Honda Accord he was driving and did not call 911. Instead, he allegedly left the scene of the accident, came back to the scene, placed the victim in his car and then returned to the scene with the victim’s dead body.

Santiago allegedly took the body of the victim, Damian Z. Dymka, a 29-year-old nurse from Garfield in Bergen County, New Jersey, to his home in Bloomfield where he discussed with his mother what to do with the body, according to the prosecutor’s statement.

Police discovered the victim in the back seat of the car after Santiago’s father, a lieutenant with the Newark Police Department, called 911 to report that his son had been in an accident, according to the prosecutor’s statement.

Also facing charges are Albert Guzman, 25, of Newark, who was allegedly a passenger in the car at the time, and Santiago’s mother, Annette Santiago, 53, of Bloomfield, according to the statement. Both are charged with conspiracy to desecrate human remains, hindering apprehension, and conspiracy to hinder apprehension and tamper with physical evidence.

Santiago has additional charges the statement says, including leaving the scene of a crash resulting in death, endangering an injured victim, desecrating/moving human remains, hindering one’s own apprehension, conspiracy to hinder prosecution, tampering with physical evidence, obstructing the administration of law, and two counts of official misconduct.

According to the statement, all three were arrested, charged and released with conditions.