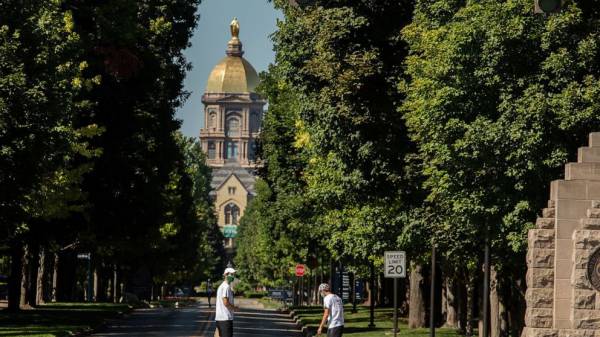 Officials at the University of Notre Dame are sounding the alarm — and limiting the size of gatherings — after a recent spike in COVID-19 cases tied to parties.

The South Bend, Indiana, school saw a “significant increase” in positive cases this week, Rev. John Jenkins, the university’s president, said in a video address Thursday, “mostly due to social activity over the past weekend.”

After averaging fewer than five new cases for the past week as of Oct. 7, the university reported 31 new cases a week later, on Oct. 14, prompting Jenkins’ address. As of Friday, the seven-day average for new cases was 11.

As of Saturday, the seven-day positivity rate was 1.6%, after jumping to 4.1% on Wednesday. It’s a far cry from when the school saw double-digit positivity rates and dozens of new cases each day amid off-campus outbreaks in August, prompting a two-week campus lockdown and increased disciplinary action.

It appears the school doesn’t want to take any chances this time, with the end of the fall semester a little more than a month away.

“I understand the weariness we all feel after a long semester under COVID restrictions, and this can lead to laxity as we socialize. Yet so many have worked so hard to bring us to this point,” Jenkins said in his video address. “We have come a long way, and we have just weeks to go. Let’s finish strong.”

Jenkins added that “if you made mistakes, as I certainly have, let us own the mistakes and resolve to do better going forward” — a nod to the criticism he recently faced over his behavior during a White House event last month.

Jenkins was seen in photos and videos not wearing a mask or social distancing while attending the SCOTUS nomination ceremony in the Rose Garden on Sept. 26. He issued an apology to the Notre Dame community for his behavior, and the university’s student senate passed a resolution last week “formally disapproving” of Jenkins’ “violations of university” health policy.

Jenkins subsequently was one of over a dozen attendees to test positive for COVID-19, along with President Donald Trump, first lady Melania Trump, press secretary Kayleigh McEnany, former New Jersey Gov. Chris Christie and others. He has since been symptom-free and ended his isolation, the university announced earlier this week.

Previous : Tehran Announces Termination of All Restrictions on Transfer of Arms to and from Iran
Next : White woman charged in racist NYC run-in made a 2nd 911 call