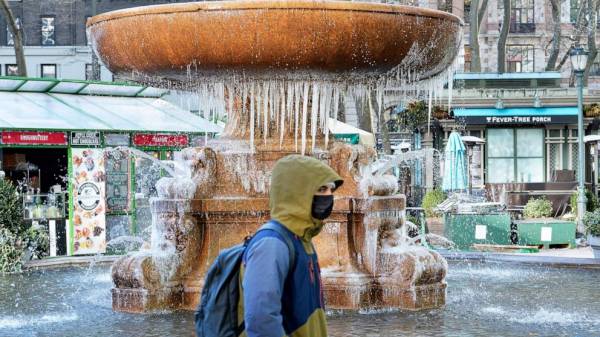 Bundle up: temperatures in the Northeast are plunging to their lowest levels in three years this weekend as snow blasts the South and the East Coast.

Matthew Mcdermott/Polaris via ReduxNew Yorkers brave the first cold weather of the winter in Bryant Park, on Jan. 11, 2022.Timothy A. Clary/AFP via Getty ImagesPeople sit by a steam pipe as they brave the temperatures in Central Park in New York City on Jan. 11, 2022.

The snow will first hit the Midwest. By Sunday morning, the icy rain and snow will rip through the South from Atlanta to Raleigh.

This storm has the potential to give Atlanta its first measurable snow in four years on Sunday.

The Southeast could then see heavy rain and thunderstorms Sunday night, causing power outages, coastal flooding and travel disruptions for the Interstate 95 corridor.

The storm then takes aim on the Northeast, where it’ll hit Sunday night and Monday morning.

As of now, the storm tracks more inland in New England and New York state, leaving more of a rain event for the I-95 corridor and the New York City area. But that could still cause travel disruptions for New York City commuters.