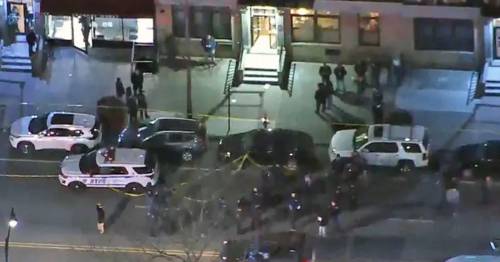 Two New York City police officers have been shot with one killed and another in a critical condition in hospital, it is reported.

A civilian who was involved in the incident in Harlem has also died, said CNN.

The incident occurred after police went to a domestic call around 6pm local time at West 135th Street on Friday.

Fabien Levy, a press secretary for the mayor's office, wrote on Twitter that "multiple officers" had been shot in Harlem on Friday evening and that Mayor Eric Adams would provide a briefing on the incident Friday night.

But he denied "reports of two officers being killed in the line of duty have not been confirmed by NYPD or the hospital."

One police officer has been killed and another injured, it is reported
(

Mayor Eric Adams is to give a briefing on the incident, added Mr Levy.

A total of four New York City police officers have been shot this week.

One officer was shot in the leg on Tuesday as he scuffled with an armed teenager.

Another officer was also shot in the leg on Thursday after a man fired through the door of a home that was being searched for drugs. Neither officer was killed in those shootings.

The violence is an early challenge for Adams, a retired police officer who took over as mayor on January 1.

Adams was elected after putting public safety at the centre of his campaign but New York has seen a spike in violent crimes during the pandemic.