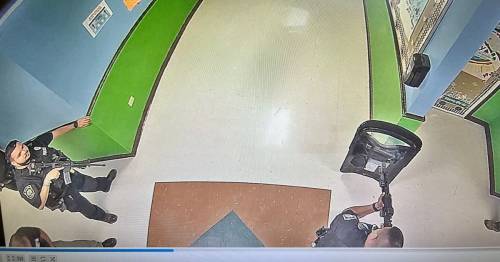 New pictures have emerged of armed police inside Robb Elementary School on the morning a gunman killed 21 people – 58 minutes before they entered the classroom where the massacre took place.

Questions have been asked of the police response to the Uvalde shooting, after they wrongly accused a teacher of leaving a door open for evil gunman Salvador Ramos.

Ramos slaughtered 19 students and two teachers with a semi-automatic rifle in an attack which has reignited the debate around gun laws in the US.

There has also been outrage at the length of time it took for police to challenge Ramos, who they eventually shot dead, with the latest footage from the scene unlikely to quell public outrage.

US journalist Tony Plohetski wrote on Twitter : “Multiple officers were inside Robb Elementary School with rifles and at least one ballistic shield at 11:52 a.m. the day of the shooting, new video and other evidence shows.

“They didn’t enter the classroom for another 58 minutes.

“Investigators believe this is significant because it indicates they had more than enough firepower and protection to enter the classroom before they did.”

It has been established that Ramos arrived at the school at 11.28am, having earlier shot his grandmother in the face.

Police received a 911 call from a teacher at 11.30am, with Ramos entering the building three minutes later.

A girl lays flowers at a makeshift memorial in Uvalde
(

Police first entered the building at 11.35am – two minutes before Ramos fired 16 rounds. Five further 911 calls were received from students at the school between 12.03pm and 12.19pm, before three further gunshots were reported at 12.21pm.

At 12.46pm police were finally given permission to enter the classroom, with Ramos shot dead four minutes later.

Last month a law enforcement official admitted that police made the “wrong decision” waiting for backup.

After days of mounting questions around the law enforcement response, Colonel Steven McCraw, director of the Texas Department of Public Safety, said that “in hindsight”, the choice made by the onsite commander to delay entering the classroom was the “wrong decision”.

"It was the wrong decision. There’s no excuse for that,” he said.

Ramos had posted pictures of his assault rifles on Instagram
(

Sewell Chan, editor in chief of the Texas Tribune, said on Twitter that security footage did not show police attempting to open the doors to classrooms 111 and 112 where the massacre took place.

He wrote: “No security footage from inside Robb shows officers trying to open the doors classrooms 111 and 112, where the shooting occurred.

“Officers had four ballistic shields inside the school during the standoff with the gunman. The first arrived 58 minutes before officers stormed the classrooms. The last arrived 30 minutes before.”

Previous : Boris Johnson ‘feeling well’ after being taken to hospital for ‘routine operation’
Next : Monkey breaks into home, snatches month-old baby as he was breastfeeding and kills him – World News