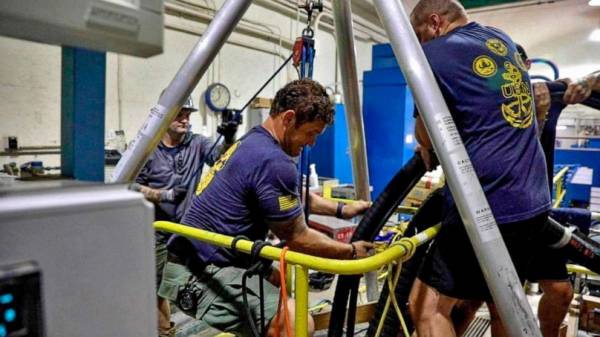 Navy to comply with orders amid Hawaii water contamination crisis

Navy leaders were questioned by the House Armed Services subcommittee on Readiness on Tuesday concerning the November fuel leak at the Red Hill Bulk Fuel Storage Facility in Hawaii that contaminated drinking water for thousands of households.

The Navy announced in the hearing that it will follow orders from state health officials to halt operations at its Red Hill facility.

“The Navy caused this problem,” said Blake Converse, rear admiral of the U.S. Pacific Fleet, during the hearing. “We own it. And we’re going to fix it.”

He said that the recent spill is likely due to an operator error, but that an independent investigation will look into potential causes, as well as systemic connections to past spills at the facility.

The Navy is responsible for ensuring safe water for nearby residents, according to branch officials, and has been ordered by the state’s department of health to provide alternative drinking water to about 93,000 residents who may be affected.

On Nov. 20, Navy Region Hawaii Public Affairs released a statement concerning a leakage of water and fuel at a nearby tank farm. At the time they reported there were “no signs or indication of any releases to the environment, and the drinking water remains safe to drink.”

The DOH later said it collected drinking water samples on Nov. 24 from the Red Hill water supply shaft as a part of routine testing. The results suggested “a trace amount of heavy oil in the samples well below drinking water thresholds and not clearly related to petroleum fuel.”

On Nov. 28, residents in military housing on Joint Base Pearl Harbor-Hickam in Hawaii, began reporting “vapors, discoloration and contamination” of the water provided by the Red Hill shaft well which sits near the Navy’s Red Hill bulk fuel storage facility, according to Converse.

Audrey Mcavoy/AP, FILEHonolulu Board of Water Supply chief engineer Ernest Lau points at a map during a meeting in Honolulu on July 27, 2016, to show where the Navy plans to build wells to monitor potential contamination from giant military fuel storage tanks. U.S. Sen. Brian Schatz said the EPA should step in after the Navy disputed the Hawaii Department of Health’s analysis of fuel contamination at a well. Lau said the Navy informed the city agency on Dec. 8, 2021, that a high level of diesel fuel was found in samples of the Aiea-Halawa water shaft.

The Hawaii Department of Health received almost 500 complaints of fuel or gasoline-like odor from people who receive water from the Navy water system.

In early December, health officials and the Navy advised residents in Pearl Harbor to stop using tap water after dangerous levels of petroleum products were found in the water system at the Joint Base at Pearl Harbor-Hickam.

According to Captain Michael McGinnis, the U.S. Pacific Fleet surgeon and senior medical adviser, his medical team screened over 5,900 patients during the response to the incident.

“Patient symptoms were consistent with an acute environmental exposure event,” he said. Symptoms include nausea, vomiting, headache, diarrhea, skin or eye irritation, according to McGinnis.

“Once patients were removed from the water source, the symptoms rapidly resolved,” McGinnis added.

The DOH ordered the Navy to immediately install a drinking water treatment system at the Red Hill Shaft and submit a work plan to assess system integrity. Within 30 days of completing the correction action, the Navy must then defuel the underground storage tanks there.

Shannon Haney/APA tunnel inside the Red Hill Underground Fuel Storage Facility is seen on Jan. 26, 2018, in Pearl Harbor, Hawaii. On Jan. 4, 2022, U.S. public health officials began investigating how civilians have been affected by the leakage of petroleum into Pearl Harbor’s tap water from a Navy fuel storage facility.

Members of the subcommittee questioned whether Red Hill was too much of a risk to keep open.

“The Navy repeatedly stated that these investments would ensure that Oahu’s drinking water was safe,” said Rep. John Garamendi, D-Calif. “Unfortunately, as we have watched this crisis unfold over the last three months, it is apparent that that was not the case.”

He added, “The Red Hill facility was an astounding feat of engineering in the 1940s … Can billions of dollars of United States taxpayer money be asked to invest in this facility? Could it be better used in finding a new innovative engineering feat for this millennium, suitable for Modern Warfare?”

Previous : Victims of Bronx fire part of ‘close-knit community’
Next : Turkey logs record level of more than 74,000 COVID-19 cases in a day