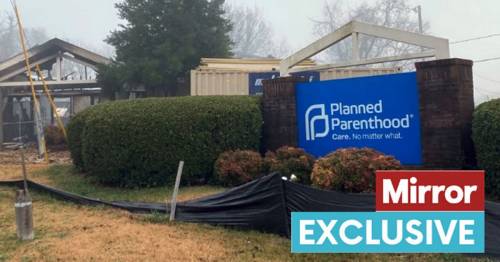 Once a safe shelter for women undergoing the heartbreak of terminating their pregnancy, all that remains is an empty plot.

Five months ago, staff at Planned Parenthood in Knoxville, Tennessee, were waiting to welcome patients to their newly renovated health centre.

The £1.8million project included modern consulting, procedures and recovery rooms that were poised to help thousands of women.

However, on New Year’s Eve, an arson razed the building to the ground.

It had become the latest statistic in almost 50 years of extreme US violence by rabid, sometimes deadly, pro-life activists against abortion medics.

It was not the first time the facility – or its staff – had been targeted.

The abortion clinic in Knoxville, Tennessee, was destroyed during a fire

It happened on January 22, 2021, the 48th anniversary of Roe v Wade, the US Supreme Court decision that protected the right to abortion in 1973.

But this week, a leaked draft ruling showed America’s highest justices were inclined to overturn the landmark verdict, sending panic across the States.

Tennessee nurse practitioner Jennifer Wiley, who did want to use her real name when discussing the attacks, said: “These fanatics will think nothing of taking someone’s life when their movement is about protecting one yet to be born.”

For 18 years, the mum-of-three worked in several women’s centres, providing a “safe, non-judgmental environment” for females wishing to get an abortion.

A leaked document said Roe v Wade could be overthrown

She said she “lost count” of how many women who nearly died after an illegal termination, including a 19-year-old who drove a knife into herself.

Jennifer, 47, who left nursing after her son, then 11, received a threat after his mum’s job was discovered by another parent at school, is fearful dangerous DIY terminations are to return.

If Roe v Wade is overturned, thousands would be robbed of reproductive rights, including victims of rape and incest.

The potential verdict leaves staff, who face harassment, stalking and death threats, fearful one of them will be killed.

Colleen McNicholas, chief medical officer at Planned Parenthood of the St Louis Region and Southwest Missouri, is under no illusions. Already seeing a rise in violence, she believes it coincides with new state laws restricting abortion and polarising politics.

Doctors and nurses – many of whom live out of state, flying in weekly for work and changing hotels most nights – are often given surveillance training to spot threats.

She said there “is likely to be a rise in harassment and violence by extremists” who are emboldened by the new legislation.

New figures from the NFA show abortion providers reported a rise in death threats and threats of harm, up from 92 in 2019 to 200 in 2020.

There was a 125% year-on-year increase in reports of assault and battery outside clinics while internet harassment, hate mail, and harassing phone calls soared.

The pandemic slightly cut pickets outside centres but in the past there were 41 bombings and 173 arsons.

In total, 11 people have been murdered, with 17 attempted killings.

The first killing was of gynaecologist David Gunn, who was fatally shot in March 1993 during a protest in Pensacola, Florida. Michael Griffin was found guilty of murder and sentenced to life in prison

In November 2015, three people died and several were injured in a shooting at a Planned Parenthood clinic in Colorado Springs.

After a standoff, police SWAT teams slammed armoured vehicles into the building’s lobby.

Suspect Robert Lewis Dear Jr had previously acted against other clinics and referred to himself as a “warrior for the babies”.

He was deemed unfit to stand trial and is now indefinitely detained at a mental hospital.

The shootings were close to home for Dr Warren Hern, 83, who for 47 years has served the women of Colorado from his clinic in Boulder.

Before Roe v Wade, he thought too many women were dying because of illegal terminations, which is why he started his practice.

Dr Hern said: “When I started as the founding medical director of a non-profit clinic, I faced hostility even from many medical community members.

“My request for hospital privileges was met with vociferous opposition until an obstetrician, who had seen too many women die of illegal abortion, backed me up.

“I got the right to admit patients to the hospital if needed.”

Dr Hern speaks about his life and how anti-abortionists have tried to take it.

In 1988, five shots were fired through the windows of his office, leading to patients and staff now protected by bulletproof glass.

In 1991, activist Randall Terry gathered his supporters around Dr Hern and prayed for his execution. The medic’s family have often been protected by armed police.

The new foundations of the Knoxville Planned Parenthood

He says if Roe v Wade is overturned, thousands of women would face potentially life-threatening situations.

Speaking about his practice and the threats to his life, Dr Hern said: “I was doing my part to make the Roe v Wade decision meaningful but, much more than that, I was saving women’s lives.

“We know we have done our part to make the meaning of that landmark decision for human freedom a reality for our patients and their families.

“The true meaning of ‘family values’ is the freedom to choose your own life and values with those you love.”

Previous : Ukraine President Volodymyr Zelensky’s iconic fleece sells for £90,000 at London auction
Next : Dad’s heartbreaking tribute to son, 12, who took his own life after mum’s suicide