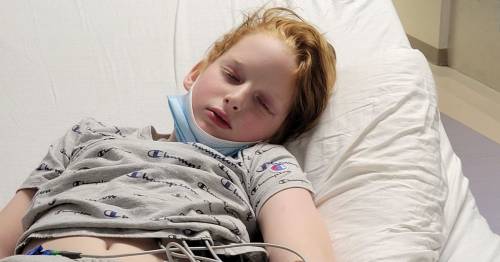 A mum has shared her "terrifying" ordeal as a warning to other parents after her 12-year-old son suffered heart failure from a side effect of a "mild" case of Covid-19.

Anita Phillips said her son Jon began getting symptoms of Multisystem Inflammatory Syndrome (MIS-C) around four weeks after he tested positive for Covid.

Writing on Facebook, she said she took Jon to a pediatrician who diagnosed him with Mono – or Glandular Fever – and prescribed him steroids, reports Yahoo News.

"They told me it could take a few days for him to start to feel better," she wrote.

Jon, who was awaiting his Covid vaccine when he got a positive test, said he didn't feel any better a few days later, complaining his chest felt like it was "burning".

Anita continued: "I took him to urgent care, where they did an X-ray and chest scan and said that everything looked good."

Jon then continued with his steroids and followed up with the doctor.

But by late afternoon the following day, the lad had bloodshot eyes and a redness developing around them.

Anita explained that all Jon would do was to sleep. He was sipping liquids but they were coming straight back out.

So, worried about dehydration, Anita rushed her son to the emergency department and they gave him fluids straight away.

It was at this point the seriousness of Jon's situation became clear.

"There were eight to 10 doctors waiting [in the room] all of which started working on my son," Anita said.

"There were two cardiologists, two infectious disease doctors, the head of paediatric ER, the head of the paediatric intensive care unit, several other doctors and four nurses.

Thankfully Jon is making a recovery
(

"The doctor pulled me aside and told me that Jon had MIS-C and that he was in heart failure.

"His blood pressure had crashed and his heart rate was 145. His ejection fraction which is [normally] at 60 was at 36.

"His heart wasn't getting enough blood."

Jon then spent five days in the paediatric intensive care unit fighting MIS-C but is now on the road to recovery.

Anita, from Michigan, US, said her son will still need to have cardiac follow-ups and follow-ups with infectious disease specialists.

At around the four-week mark and after a positive Covid result, Jon's body was trying to shed the virus and it "sent his immune system into shock".

His heart started inflaming, but this was missed by doctors at first because it is such a rare condition.

"But it's real and extremely dangerous," Anita warned.

Dr Anna Sick-Samuels from John Hopkins Medicine, writes on hopkinsmedicine.org : “The syndrome is an inflammatory reaction in the body about four weeks after infection with the SARS-CoV-2 virus.

"The inflammation can affect the heart, blood vessels and other organs, which can make some children very ill and in need of urgent care.

"MIS-C is treatable if it is detected."