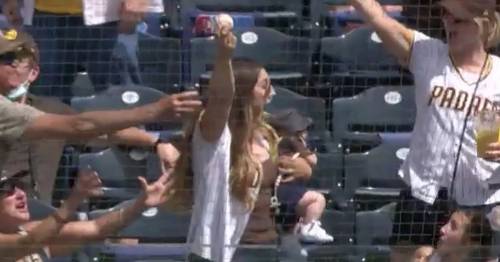 This multi-tasking mum stole the show by grabbing a speeding stray baseball while clutching her little baby.

The proud parent was beaming after taking the crazy catch during the Chicago Cubs clash with Padres.

Fans couldn't believe it as she claimed the foul ball – and celebrated in style with other fans in California.

But on the first-base line the well-occupied woman was watching – and waiting for her big moment.

Reaching out with her baby safely in her arms, the mum made a great catch and left her fellow supporters inside Petco Park amazed. 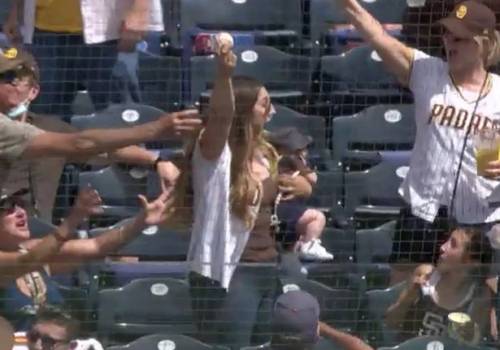 She didn't miss her big chance, even with a baby in her arms

Sporting a Manny Machado jersey, she made a remarkable stretching grab with her right hand with her left very much holding the baby.

They were dazzled by her ability to keep an eye on the ball, and the infant in her care.

In time-honoured baseball tradition, she high-fived everyone she could find.

Jumping up and down to celebrate, those sitting in the seats around her loved it too.

“The right-handed grab and baby in tow,” the stadium announcer said after watching the woman pluck the ball out of the air.

“That’s a nice grab. But be careful of the little one, though!” 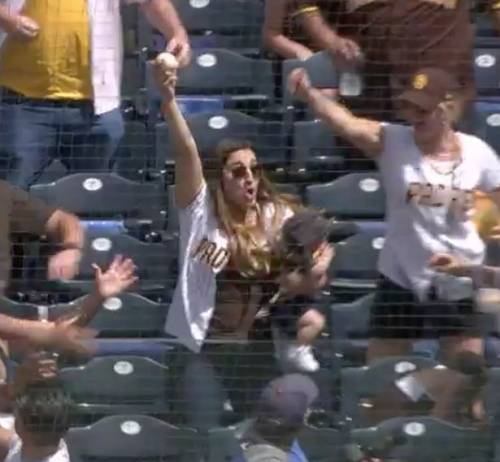 It came in the sixth inning during a game the Cubs won 3-1.

Footage of the catch went around the world – and her fellow sports fans certainly enjoyed it as much as she clearly did.

They took to Twitter to talk about the moment of the match.

One wrote: "Now that's a catch she could teach the team a thing or two".

Another posted: "I wouldn't have gone near that ball if I had a beer in my left hand let alone a little baby… that's skills." 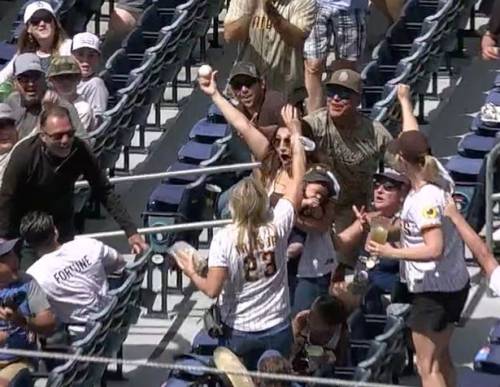 She did a dance in the stands after her incredible catch

One teased: "Arrest her for child endangerment! lol"

It was a big win for the Cubs, who continue to show their rivals how much quality they have after a recent slump.

They have climbed back to the upper tier of the National League Central after an April to forget.

"We're just excited about where we are in the standings and the way we're winning and playing," Cubs right-hander Kyle Hendricks said.

"We can get the job done with what we have in the clubhouse. We're really confident in that group that we have."

The win on Wednesday sealed a series victory on the road against the tough San Diego squad.

"We're showing this could be a real team that can last the journey," Cubs manager David Ross said.

Previous : OnlyFans model kicked out of £18,000-a-week villa for sharing bikini pic taken inside
Next : There Are Five Oceans on Earth Now, National Geographic Says