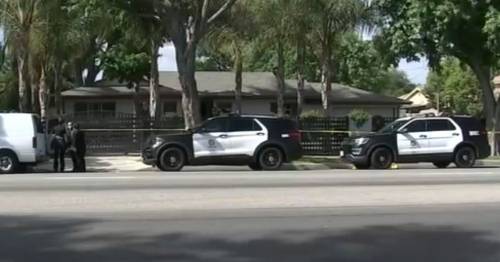 A mum has been arrested after three children were found dead at a home at the weekend.

Police responded to reports of an assault with a deadly weapon at about 7.40am local time on Sunday morning, it has been reported.

Three children aged eight to 12 were found unresponsive and sadly pronounced dead at the scene.

The woman, who has not been named, is said to have wandered into her neighbour's garden, opened a Bible and lit candles on Saturday night.

She was arrested yesterday – the same day that Mother's Day is celebrated in the US. Los Angeles Police say she has not yet been charged.

Neighbours said they heard the woman screaming the night before

The night before, neighbours say the mum was heard screaming: "My family is abusing me!"

A different neighbour says they saw her walk into the garden next door for a religious ceremony, the Los Angeles Times reports.

Paramedics were called at about midnight and put her on a stretcher.

A neighbour said she tried to break free and screamed: "Where's my Bible?"

It is unclear what happened in the time between the woman's being stretchered away and the children being found dead the next day.

People at the scene of the tragic deaths

LAPD also confirmed that another child was involved but they are unhurt.

Police say they ran to a neighbour's house, Fox11 reports.

The mum was taken to a hospital for a mental evaluation and was later placed in LAPD custody.

There are no other suspects in the children's deaths, police say.

The abused child unit in the LAPD's Juvenile Division is investigating deaths, the LA Times reports.

Police were seen going in and out of the house on Sunday as they collected evidence and carried out their investigations.

LAPD Public Information Officer Matthew Cruz: "No other suspects are being sought at the moment."

Neighbour Priscila Canales said she heard the woman screaming on Saturday night and said: "The screaming you heard; you knew she was not OK. I can still hear her screaming."

He said: "They look like nice, normal people. It is one of the nicest looking houses on the block."

One neighbour who lives nearby said he heard muffled cries on Saturday night.

He said: "I thought I was just dreaming. I thought West Hills was supposed to be safe. Nothing is safe nowadays."

Previous : Man, 23, ‘died from allergic reaction’ after ordering pizza from Deliveroo
Next : Boris Becker ‘complains about prison food’ as tennis star shocked by lack of hygiene