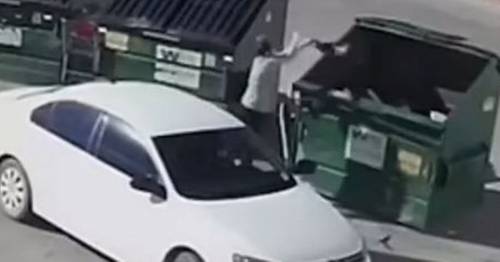 A teen mum has confessed to tossing her just-born son into a rubbish bin and leaving him clinging to life for six hours after fleeing the scene, police say.

The little boy was found in a "dirty, wet towel" and covered in dried blood with his umbilical cord still attached, according to police in Hobbs, New Mexico.

They confirmed a young woman, Alexis Avila, 18, confessed after being charged with child abuse and the attempted murder of her infant child relating to the Friday night incident, local site KOB4 reports.

In CCTV footage, a white car is seen pulling up to the car park rubbish bins before a person in the back seat hangs out of the window to chuck a black bag inside.

Around six hours after the suspect sped off, a group of dumpster divers arrived and heard a faint wail from the bag.

Teen mum Alexis Avila, 18, is suspected of chucking her newborn baby into a car park rubbish bin in New Mexico in the US

Acting Hobbs Police Chief August Fons said the little one was wrapped in a "dirty, wet towel" and covered in dried blood when he was found.

The youngster's umbilical cord was also still attached to his belly button, he added.

The chief praised the group who found the baby for their "collective quick response" which saved his life.

"The group's collective quick response to this emergency, including notification of 911, was absolutely pivotal in saving this baby’s life," he told Fox News.

The same camera that filmed the crime also filmed the moment the group, who have been called "angels" by local media, found the abandoned babe.

Local site KOB4 said the CCTV captures the moment the witnesses start digging through the same dumpster and pull out a black bag before looking through it.

Just seconds later a woman lays eyes on the child and opens the bag, retrieving the newborn and tending to it.

Police tracked the number plate on the white car and arrested Avila.

According to reports, she said she did not know she was pregnant until last week when she looked for treatment for abdominal pain.

She said the baby's father is a juvenile and she ended her relationship with him back in August.

The officers also said she told them that she gave birth in her parents' bathroom and panicked.

Avila allegedly stuffed the baby inside two plastic bags, one with other trash, and left it in the dumpster.

The baby was taken to a nearby hospital after the rescue and later travelled by helicopter to another hospital in Lubbock, Texas, where he remains in stable condition.

The police declined to release any additional information on the child.

If you have been affected by this story, advice and support can be found at Sands (stillbirth and neonatal death charity). You can call them on 0808 164 3332 or email helpline@sands.org.uk.

If you have been affected by this story, advice and support can be found at the Miscarriage Association. You can call them on 01924 200799 or email info@miscarriageassociation.org.uk