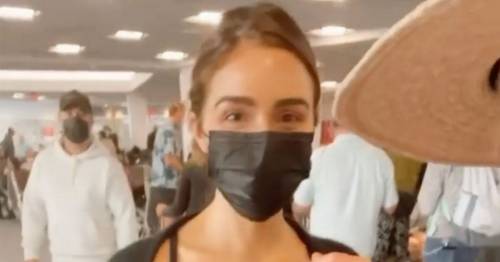 A former Miss Universe winner claims she was told to "put on a blouse" before boarding an American Airlines flight with her sister and boyfriend.

Olivia Culpo was heading to Cabo San Lucas on Thursday when she was singled out and asked to put more clothing on, according to her sister Aurora.

In footage shared through her Instagram stories, her sibling claimed that 29-year-old Olivia was called to the front of their gate only to be told to put on a jumper.

If she didn’t, she risked being booted off the flight, in a move Aurora called “f***** up”.

The former Miss Universe can be seen in the clip wearing a black cardigan, sports bra and biker shorts, clothing her sister said wasn’t “inappropriate” or “offensive”.

Another passenger on the airline thought the request from the airline was “weird” especially considering their own outfit was lower cut then the pageant winner’s and no one had approached her or asked her to change.

Olivia re-posted her sister’s stories to her own Instagram account, with the caption: “Leave it to Aurora to cause a scene. Hide me.”

To ensure she was let onto the flight, Olivia put on her boyfriend's grey hoodie, leaving him without it for the duration of the flight.

Olivia was also joined by her partner, Christian McCaffrey, of the NFL team Carolina Panthers.

On American Airlines' websites, who she flew with, passengers are told that they must "dress appropriately" and not wear "offensive clothing".

Her sister documented the incident on her instagram story, including Olivia's NFL boyfriend being left without his hoodie on the flight
(

The only other guideline is not going barefoot on the flight

Adam Anolik, who specialises in travel law, previously told The Washington Post : "Different airlines have their own policies regarding dress, but they are often vague and leave an exorbitant amount of discretion to the airline employees."

This is not the first time Olivia has had run-ins with airlines.

When she was heading out to visit her parents, flight company JetBlue banned her dog from coming on the flight.

The 2012 Miss Universe winner took the Instagram to complain, she wrote: "I'm sure I'm not the only one who ran away crying at the airport, but it's the worst experience I've ever had,' she said. 'I just want to be able to go home.

"When both your parents have Covid and you're trying to get home to help them but suddenly your dog who was already pre approved is not allowed to fly with you.

"I have never wanted to be this person and I have always been the hugest @jetblue fan but I am just soooo so so upset right now. He has flown on this airline so many times and it's never been an issue."

Previous : Anthony Joshua admits he has only watched four rounds of Oleksandr Usyk defeat
Next : Mum living in house so damp she fears it will collapse and bed feels like ‘a shower’