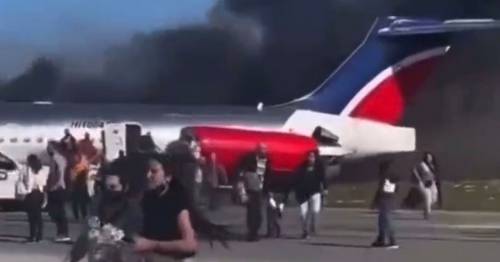 Miami plane crash: Passengers flee from burning aircraft after it smashes into runway

Terrified passengers screamed and scrambled to get off a plane after it burst into flames during a horror crash landing at Miami Airport.

Reports say the aircraft was returning to the Florida international transit hub from the Dominican Republic when the landing gear failed – forcing the pilot to crash land the 100-passenger flight.

In footage recorded outside the plane, firefighters can be seen spraying foam over the aircraft in a desperate attempt to quench the blaze.

But now video from inside shows the terrifying moment frenzied passengers barge through the plane and slide down the emergency chute, taking them to the safety of the runway.

The travellers can be heard screaming in Spanish as a flight attendant directs them out of the door.

After he gets to the safety of the tarmac, the man filming turns to show the thick plumes of black smoke and flames billowing from the back of the plane.

Reports say the plane hit a communications tower and a small building after landing before finally coming to stop in a grassy area.

Twitter users suggested the passengers had been able to exit the plane safely, with only a handful suffering minor injuries.

Passengers slid down an emergency chute to escape
(

It is not clear whether the issue with the landing gear happened during the flight or as the aircraft landed.

US-based journalist Moshe Schwartz said on Twitter: “Reports of a plane – arriving from Santo Domingo at Miami International Airport – has caught on fire after its landing gear collapsed.

“Four people have minor injuries per reports, after the Red Air civilian airliners landing gear collapsed causing a fire to break out. 126 people, including 11 crew members were on board.”

Sharing images and video of the scene, Twitter user @Duardy_Estrella said: “They tell me that this plane with Dominicans and Venezuelans landed in an emergency in Miami.

“Apparently it had problems with the landing gear and landed on its underside. Everyone safe I'm told!”

There were no fatalities and only four passengers sustained injuries, all minor
(

At the start of June, a military aircraft crashed – killing all five US Marines on-board.

A military aircraft has crashed in the US, with five people on board presumed dead.

The crash took place in the Imperial County area of California, United States, near Route 78.

The plane, which belonged to the 3rd Marine Aircraft Wing, went down at 12.25pm local time.

It was originally reported that the plane may have been carrying nuclear material, however this was later denied by the military.

"Military and civilian first responders are on site. Contrary to social media rumours, there was no nuclear material on board the aircraft."