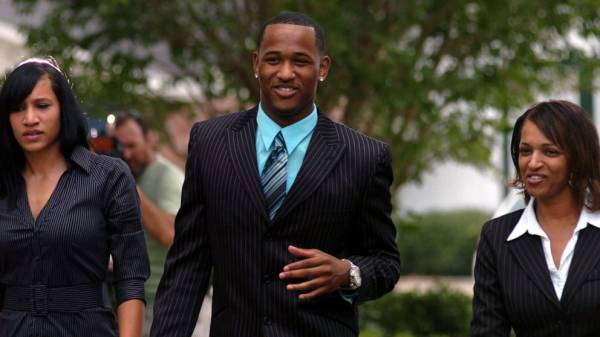 Bryant Purvis was just 17 when he became a part of the “Jena Six.”

He and five other Black teens were accused and later convicted of attacking a white student at a high school in Jena, Louisiana, a town with a large majority of white residents, after a series of racially charged incidents there.

The case against the teens became for many a symbol of racial discrimination in the justice system — attempted murder charges for what supporters called a schoolyard fight. The charges were later dramatically reduced.

Bloomberg via Getty Images, FILEBryant Purvis, 17, walks outside the LaSalle Parish Courthouse during a rally attended by Reverend Al Sharpton and others in Jena, La., Sept. 20, 2007. Thousands of people gathered to support the Jenna Six, the black teenagers who had been charged with attempted murder in the beating of a white classmate.

Purvis, now 32, maintains he was not involved in the fight. He has since dedicated his time talking to students about racial injustice as a motivational speaker. He also authored the book, “My Story as a Jena 6,” in 2015, but is now focused on his future beyond the “Jena Six” label.

“At the time, it was just so much emotion,” Purvis, who now lives in Dallas and has a 9-year-old son, told ABC News.

“It was more extreme because I knew I didn’t commit the crime. So, once I found out the charges, knowing where I was in Jena, I just didn’t see it coming out good.”

At the beginning of the 2006 school year, several Black students were sitting under a tree at Jena High School where white students usually congregated, according to the ACLU, which advocated on behalf of the Jena Six. A day later, three nooses were left hanging from a branch on the tree, and three white students were temporarily suspended, the ACLU reported, despite the principal’s recommendation to expel them.

Gerald Herbert/AP, FILETheo Shaw stands outside of the Louisiana State Supreme Court, where he works as a clerk for Chief Justice Bernette Joshua Johnson, in New Orleans, Nov. 2, 2018. Shaw was one of six black students arrested in Jena, La., in the beating of a white high school student. Unable to post bond, he spent months behind bars but always maintained his innocence.

Later that year, a white adult at a gas station pulled a shotgun on three Black teens, including Bailey, but the teens were the ones charged in the case — for taking the gun and bringing it to police, according to a 2009 Good Morning America report.

On Dec. 4, 2006, six Black teenagers, now known as the Jena Six were accused of beating up a fellow white student Justin Barker, who was hospitalized and suffered a swollen eye and a concussion, according to Barker’s family.

He said in interviews years later with The Associated Press that he didn’t know why he was attacked.

The Black teens were arrested and charged with second-degree battery, which was later upgraded to second-degree attempted murder and conspiracy to commit attempted murder, despite Barker returning to a school function hours later, according to the Southern Poverty Law Center, which represented one of the teens and helped arrange the defense for another.

Supporters argued the charges were far too serious for the severity of Barker’s injury, sparking a massive protest and litigation efforts to have the charges reduced, SPLC said.

Bell, then 16, was charged as an adult and pleaded guilty to second-degree battery and conspiracy to commit second-degree battery. However, his conviction was later overturned after a judge ruled he should have been tried as a juvenile. Bell still received an 18-month detention sentence.

Nicholas Kamm/AFP via Getty Images, FILEJena Six supporters demonstrate in Washington, D.C, Oct. 2, 2007, saying their civil rights have been grossly violated and demanding that all charges against them be dropped. Mychal Bell, 17, had been jailed since December when he and five other black students who became known as the “Jena Six” beat up a white student at school following months of racial tension in the town of Jena.

The other five pleaded no contest in an agreement that reduced their charges to a misdemeanor simple battery and did not admit guilt or involvement. Each one of them was fined $500 and served a week of unsupervised probation.

“We recognize that the events of the past two and a half years have also caused Justin and his parents tremendous pain and suffering, much of which has gone unrecognized,” the teens said in a prepared statement read in court, according to SPLC. “We hope our actions today help to resolve this matter for Justin, Mr. and Mrs. Barker, and all others affected, including the Town of Jena.”

DA said race not a factor

The district attorney at the time, Reed Walters, claimed race wasn’t a factor in the charges.

“It is not and never has been about race,” Walters said, according to an AP report at the time. “It is about finding justice for an innocent victim and holding people accountable for their actions.”

“From racial profiling to unequal punishment in school to potential misconduct by authorities, the Jena Six case causes great concern,” Marjorie Esman, executive director of the ACLU of Louisiana, said in a 2007 statement.

“It is time to fully examine the facts surrounding this case to determine if any racially motivated misdeeds have taken place. Considering the concerns that the Jena Six bring up, we must redouble our commitment to equal protection — not just in Jena, but across Louisiana and the rest of the country.”

Thousands came out to protest during their trials in 2007. Demonstrators were furious with disparities in the criminal justice system, which they said often resulted in harsher, more unjust charges and sentences for Black people compared with white people.

Trying to move on

Following the incident and their convictions, the other men too wanted to move on — some going to college, others entering the labor force. Shaw also maintained his innocence, claiming he was not involved in the fight.

Purvis said racial division and segregation had long been an issue in Jena, for as long as he could remember, but the experiences of the Jena Six shined a national spotlight on the tensions that were building up.

“I would say we kind of put pressure on the officials and everybody that run the town to make a change,” Purvis added. “We brought a lot of attention to the community … A lot of other things that happened leading up to that fight that really weren’t publicized.”

Years later, Purvis has a message for Black men about ongoing injustice in America: “Carry yourself in the right manner, and don’t let one situation define who you are.”

“Things are gonna happen to you,” he added, “but it’s not about what happened — it’s how you respond.”

Previous : Five migrant crisis points around the world where people risk lives every day – World News
Next : Unique home in popular UK village on the market for £140k – but it’s in a graveyard