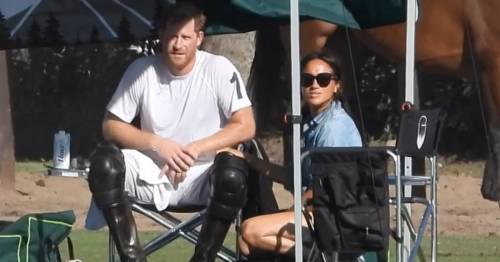 Meghan Markle comforted Prince Harry after a polo defeat in the US amid his ongoing row with his brother the Duchess of Cambridge, as pals say their relationship is at "rock bottom".

Meghan joined other WAGs to cheer her hubby on as his team Los Padres took on Folded Hills in a semi-final game at the Santa Barbara Polo & Racquet Club.

She was seen with his hand on his leg offering him support, while Harry was photographed shouting in frustration when the chances of reaching the final slipped away.

It comes after Prince William's pal told the Daily Mail that the brothers' relationship is at "rock bottom" after then spent very little time together at the Jubilee.

Meghan joined other supporters to watch the game
(

Harry was very involved in the game
(

Pals told the newspaper the future king, who turns 40 next week, believes his younger brother has crossed a line.

They said: "He alternates between grieving for what he has lost and feeling really, really angry about what his brother has done,' said one.

"He truly loves Harry and feels he has lost the only person, aside from his wife, who understood this strange life of theirs.

"But he believes there are things you just don't do. And Harry has 100 per cent crossed that line."

The couple were seen chatting after the defeat
(

As part of the Sussexes new lives in the US after quitting the royal family, Harry has signed up to play the entire polo season with his pal Nacho Figueras, who has been dubbed the David Beckham of polo.

Meghan was seen giving Nacho a hug during yesterday's sporting feature and she also chatted to his wife Delfina Blaquier on the sidelines.

The Duchess looked stunning in the sunny weather, wearing denim shorts with a denim shirt.

She teamed them with big black sunglasses and brown sandals, with her hair in her trademark messy bun.

She was seen drinking a cool beverage in a clear plastic glass as she watched the game.

It's the second match Harry has played in since returning to the UK for the Queen's Platinum Jubilee, which saw the couple reunited with several members of the royal family for the first time since their bombshell Oprah Winfrey interview.

However he was thrown from his horse during last week's game in a heart-stopping moment.

But luckily both the prince and his horse were unscathed in the incident and he was quickly back in the saddle – although his side were on the receiving end of a 12-11 defeat.