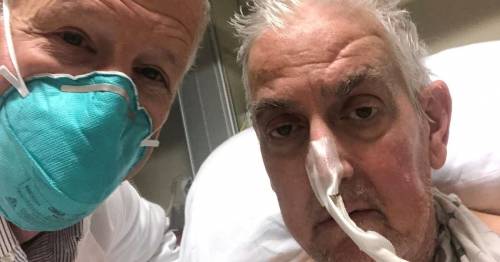 A man who became the first in history to have an entire pig heart transplanted is awake and 'smiling' after his surgery – and now a doctor has shared his last words before going under.

Terminally ill David Bennett was told he had just months left to live as he had a heart disease but he was determined to survive so he signed up for the experimental procedure.

He went under the knife at the University of Maryland Medical Center in Baltimore on Saturday, January 8, for a nine-hour procedure performed by Dr Bartley Griffith.

The operation has so far proven to be a success, and Dr Griffith has revealed his patient's last words, which were: "I want to live, and if I don't you'll learn something."

Image:
UNIVERSITY OF MARYLAND SCHOOL OF)

What do you think of the incredible procedure? Let us know in the comments…

David, a 57-year-old labourer, was given the heart from a pig that had been gene-edited to make it more compatible, lowering the chances that his immune system would reject the organ.

Appearing on ITV this afternoon, Dr Griffith said: "He himself said, 'I want to live, and if I don't you'll learn something.

"I wish we knew more but we're learning a lot every day with this gentleman and so far we're happy with our decision to move forward and he is as well, he's got a big smile on his face today

Experts say it is too soon to know whether David's body will accept the organ and the next few weeks are critical for his recovery.

Sparking to ITV, his son, David Jr, said: "He realises the magnitude of what was done and he really realises the importance of it.

In the first three days since receiving the organ, David has shown no signs of rejection.

Mr Bennett agreed to be the first to risk the experimental surgery in December, hoping it would give him a new life.

Mr Bennett decided to undergo the pioneering surgery on the experimental treatment because he would have died without a new heart, had exhausted other treatments and was too sick to qualify for a human donor heart, family members and doctors said.

Do you have a story to share? We'd love to hear all about it. Get in touch via yourmirror@mirror.co.uk

Previous : Covid-hit cruise ship passenger abandoned in ‘horrendous’ £750 quarantine hotel – World News
Next : Who is Alex Hawke? The one man in Australia who still has the power to deport Novak Djokovic