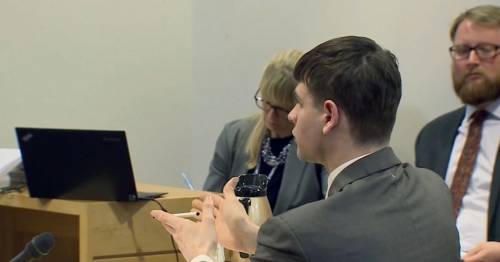 A man is accused of letting his own mother drown while on a fishing trip in a bid to claim $7million (£5.6m) in inheritance, according to court papers.

Nathan Carman is also alleged to have murdered his grandfather as part of the same plot to obtain trust fund money and assets.

The 28-year-old, from Vermont, US, is facing eight charges in relation to his mother's death, including federal murder and fraud.

Carman's mum, Linda, vanished in 2016 while on her son's boat Chicken Pox, which he sank off Rhode Island, prosecutors say.

It is believed he rigged the vessel so it would take on water and then lied to the Coast Guard and police.

Eight days later he was spotted in a life raft and pulled from the sea by a freighter.

He claimed he swam to the raft as the boat sank and despite calling for his mother, never saw her.

John Chakalos was shot dead in his home
(

Three years earlier, he is alleged to have shot dead his grandfather John Chakalos while he slept at his home in Windsor, Connecticut.

The previous evening they had both had dinner together.

Police never filed criminal charges, but issued a search warrant for his apartment saying that he was the last person to see his grandfather alive.

NBC News reports the US Attorney's Office in Vermont said in a statement on Tuesday: "Both killings were part of a scheme to obtain money and property from the estate of John Chakalos and related family trusts."

The defendant has always denied having any involvement in his mother's disappearance or grandfather's death.

Mr Chakalos left his $42million (£34million) fortune to his four daughters, including Linda.

The indictment also states the defendant persuaded his mum to name him as a beneficiary of her inheritance.

Carman, who was living in a home in New Hampshire built by Mr Chakalos, bought the rifle allegedly used in the murder in November 2013.

The following month, his grandfather was killed, aged 87.

Prosecutors say Carman covered up his involvement by discarding his computer hard drive and GPS unit from his truck.

The defendant is alleged to have already spent all of the $550,000 his grandfather transferred.

In 2016, Carman moved to Vermont and had become "low on funds", the indictment said.

On September 17 of that year, Linda arrived at her son's home around 11pm. During a subsequent overnight boat trip she disappeared.

Carman is accused of altering the vessel by removing two forward bulkheads as well as trim tabs from the transom of the hull, according to the indictment.

The Coast Guard launched a search after the boat failed to return to port in South Kingston, Rhode Island, the following day. This continued until September 24.

Carman was then pulled from a life raft 115 nautical miles from Martha's Vineyard, Massachusetts, by Chinese freighter the Orient Lucky.

And despite searching his apartment, police did not charge Carman in his mother's disappearance until the indictment was filed on May 2 and he was arrested.

However, his aunts had filed a 2017 lawsuit in which they claimed their nephew should be considered a suspect for Linda's disappearance and Mr Chakalos' death.

The US Attorney's Office describes Linda's death as "murder on the high seas".

If Carman is convicted over his mother's death he could face life in prison.

Previous : US soldier dies after being mauled by bear during routine Army training exercise
Next : Dallas Cowboys-Green Bay Packers matchup set for Week 10