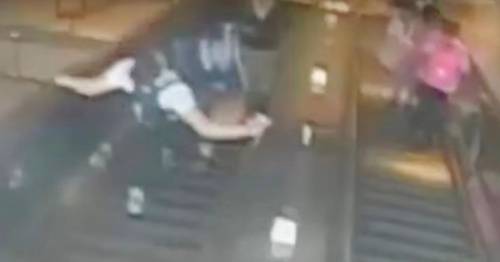 A woman can be seen being kicked in the chest and falling all the way down to the bottom of a station escalator, in shocking footage.

Surveillance cameras showed a man lash out with a high kick after pushing past her on a Brooklyn subway station escalator in New York.

The 32-year-old woman reportedly asked the man to say “excuse me” after passing her, causing his violent response.

New York City police have confirmed that a woman was attacked after she confronted the man on the escalator at the Atlantic Avenue-Barclays Center Station, last Thursday evening.

The Daily News reported that the man responded to the victim’s comment that he should have said excuse me, by saying “I did” and then kicking her in the chest.

The man then calmly walks away and out of the station
(

After the woman hurtled to the bottom of the escalator, the man calmly walks away and leaves the station.

Fortunately the woman only suffered cuts and bruises to her back, arms and legs said the police.

The NYPD released photos of the suspect on Sunday night and are asking for the public's help in identifying him.

It follows a surge in violence in New York.

Fortunately the woman only suffered cuts and bruises from the attack
(

A heavily-pregnant woman was shot dead in front of her two children after her baby shower while trying to break up a fight between her ex and new boyfriend, say reports.

Shanice Young, 31, was tragically found with a gunshot wound to her head and unresponsive when police were called to the scene in New York at about 1.15am on Saturday.

She had been trying to break up a fight between the two men before she was shot.

There were nine shootings the previous weekend in New York.

A 21-year-old cab driver was caught in crossfire in Harlem on the Sunday and died three days later in hospital.

The recent spate in crime follows a drop in August by 3.7% and New York Police Department Commissioner Dermot Shea reportedly is calling for a tougher stance on criminality.